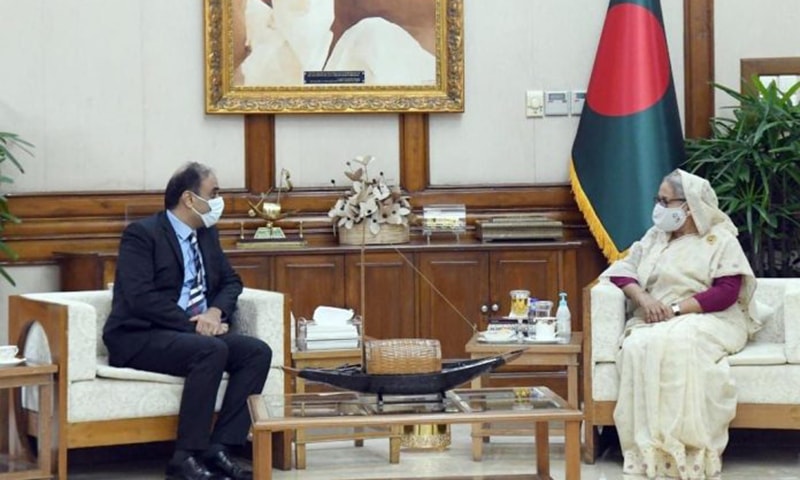 She was talking to Pak­istan’s High Commissioner to Bangladesh Imran Ahmed Siddiqui during their meeting in Dhaka.

The Pakistan Foreign Office, in a statement issued here, said the two sides agreed to promote relations between the two countries.

This was the second meeting between Ms Hasina and Mr Siddiqui in nearly eleven months.

The meeting came amid warming of ties between the two countries after remaining in deep freeze for over a decade.

It is important to note that the meeting took place at a time when both countries have begun to prepare for Ms Hasina’s first visit to Pakistan.

The Bangladeshi prime minister has recently conveyed in writing to Pakistan her acceptance of Prime Minister Imran Khan’s invitation, which was extended last July. No dates have been set as yet for the trip. Ms Hasina has also invited Mr Khan to visit Bangladesh.

The Pakistani side has proposed to Bangladesh to prepare a road map for the prime minister’s trip so that it is fruitful. Moreover, Islamabad is seeking revival of bilateral mechanisms like the foreign secretaries’ dialogue, which has not been held for nearly 13 years.

The Pakistan-Bangladesh relationship, it should be recalled, took a nosedive after Ms Hasina started her second tenure as prime minister in 2009 as she resumed the so-called 1971 ‘war crimes’ trial.

Pakistan has always considered the bitter 1971 dismemberment of the country as a closed chapter in view of the tripartite agreement signed in April 1974 for the repatriation of war prisoners.

The FO said Mr Siddiqui conveyed Mr Khan’s message of goodwill and friendship to Ms Hasina and the people of Bangladesh. He also presented a photo album of the late prime minister Sheikh Mujibur Rahman’s visit to Pakistan in 1974 to attend the OIC Summit; videos of his engagements in Pakistan during the summit; a photograph of Sheikh Mujibur Rahman’s portrait in Lahore Museum, as well as Bangla version of a coffee table book “Alla’ma bil Qalam” containing calligraphy-art rendered by Pakistani artists.

Prime Minister Hasina thanked the high commissioner for the gifts and reciprocated the greetings and good wishes by PM Khan. (Dawn)