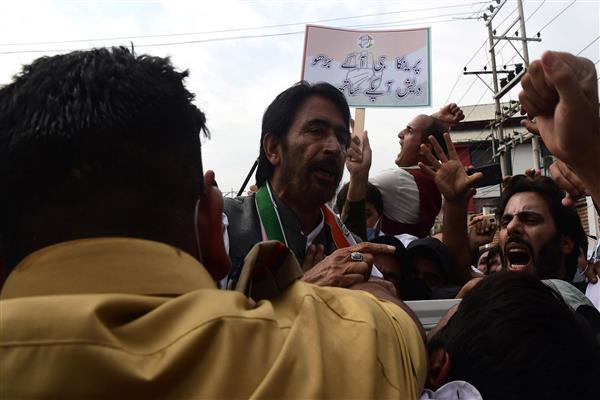 Srinagar, Oct 05: The Jammu and Kashmir Pradesh Congress Committee (JKPCC) on Tuesday staged strong protest against detention of Priyanka Gandhi by UP Police and sought her immediate release.

Amid slogans against the UP Govt and Modi Govt at Centre, Congress leaders and workers led by JKPCC President staged massive protest and demanded stern action against the UP Police for arresting Priyanka Gandhi, who was going to meet families of slain farmers, but was detained, without any reason.

Prior to the detention, JKPCC President addressed hundreds of Party workers at Srinagar party headquarters and lashed out at Centre Govt and UP Govt for the political vendetta against the Congress Leaders to hide their anti-farmers and anti-people policies.

Mir said Congress Party won’t be cowed down by the barbarism and illegal detentions, rather it will further strengthen our resolve to fight against BJP, which was responsible for the crisis across country, he added an demanded immediate release of Priyanka Gandhi and stern action against those responsible for the killing of farmers in UP.

The rank and file of the Party led by JKPCC President expressed solidarity with Priyanka Gandhi and urged the people across the Country to rise to the occasion to defeat the designs of BJP. kns