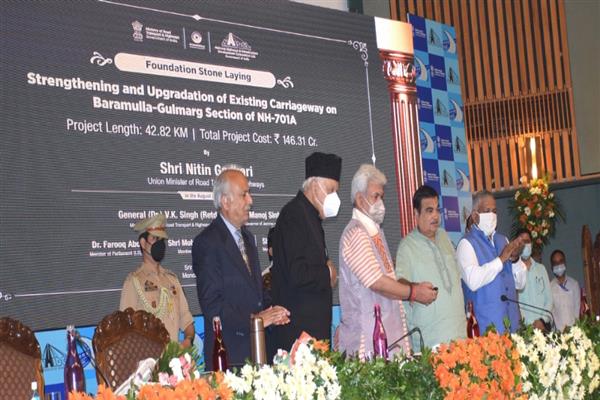 General (Retd.) V.K. Singh, Union Minister of State for Road Transport and Highways was also present on the occasion.

Union Minister, Nitin Gadkari, during his address, termed road connectivity as a key driver of the socio-economic growth and development of any region.

There is no dearth of funds in the ministry. I ensure you to bring in logistic support of every kind that is beneficial for the tourism and economy of J&K, the Union Minister said.

The new projects will further strengthen the road connectivity in J&K, thus opening up new livelihood avenues for the local population, enhancing tourism & business activities improving the quality of life of the people, he added.

Our endeavour is to lessen the time travel between the cities of India tremendously. Be it Delhi-Jammu, or Jammu to Srinagar, the time to travel would get reduced to half by providing expressways and better road connectivity to the people. Mega Highway road and tunnel projects will reduce the travel time from Delhi to Kashmir to 8 hrs in coming years, said the Union Minister.

The Union Minister said that the long-pending prestigious Srinagar Ring Road project would be completed by end of 2023. Besides, the work on Srinagar-Jammu National Highway would be completed in next 2-3 years bringing in much respite for the people of the UT, he added.

While speaking on the occasion, Lt Governor said that these NH projects would catalyze overall socio-economic development in the Union Territory of Jammu and Kashmir. The projects include Strengthening and Upgradation of 43 km existing carriageway on Baramulla-Gulmarg Section of NH-701A, Construction of new double lane bypass from Donipawa via Ashajipora connecting NH-244 & NH-44, Construction & Upgradation of existing 28 km stretch from Vailoo to Donipawa on Khellani Khanabal Section of NH-244, besides the construction of much-awaited Ring Road around Srinagar city.

The Lt Governor said that Jammu and Kashmir has undergone tremendous changes in terms of infrastructure development during the last few years.

My sincere gratitude to Hon’ble PM Shri Narendra Modi Ji, who has brought qualitative change in people’s lives since 2014. From National Highways to rural roads, the infrastructure has become stronger than ever, added the Lt Governor.

‘Till 2014, there were only 7 National Highways in the erstwhile Jammu Kashmir including Ladakh. In 2021, the number of National Highways has increased to 11 in J&K alone. In 2015, Hon’ble PM had announced road infra projects worth Rs 40,900 crores for J&K, out of which work on projects of about Rs 38,000 crores is already underway’, the Lt Governor observed.

Thanking Nitin Gadkari for the speedy execution of National Highway projects, the Lt Governor said that the Minister has always been proactive and has created a record for the fastest road construction work in the country.

Today roads are being built at a much faster pace than ever before. This year a target of 8000 km of macadamisation has been set by the UT Administration. And with this kind of approach, Jammu and Kashmir today has the distinction of being the third-best in terms of road construction, said the Lt Governor.

The Lt Governor observed that with liberal funding and special interest of Prime Minister and Union Minister for Road Transport and Highways in the development of Jammu and Kashmir, 11 tunnel projects have been approved for J&K in one year only. ‘Four tunnels will be built on Chenani-Kishtwar highway at a cost of Rs 10,000 crores. To modernize Jammu-Srinagar National Highway, tunnels at a cost of Rs 4000 crores, besides 5 flyovers worth Rs 3000 crore will be built in J&K, reducing the travel time and traffic congestion substantially. By December 2022, Kashmir will be connected to Kanyakumari by train, said the Lt Governor.

Enumerating the achievements during the last one year, the Lt Governor said that under the guidance of Hon’ble Prime Minister, right from the development of health infrastructure to roads, education, and employment, industry, and handicrafts promotion, agriculture to food processing, Jammu and Kashmir has shown visible progress in every field and with huge potential, the UT is emerging as a vibrant economy, ready to stand with the developed states. ‘We have taken new strides in every field, with empowerment of people and an inclusive approach, we are treading the path of a new, developed, peaceful Jammu and Kashmir’, the Lt Governor added.

General (Retd.) V.K. Singh, Union Minister of State for Road Transport and Highways, also spoke on the occasion and extended every possible support from the Union Ministry to strengthen the road connectivity in the UT.

Manoj Kumar, Member Projects, National Highways Authority of India (NHAI), in his welcome address gave a detailed briefing of the several NHAI projects being executed in the UT.

Shailendra Kumar, Principal Secretary to the Government, Public Works (R&B) Department presented the vote of thanks.