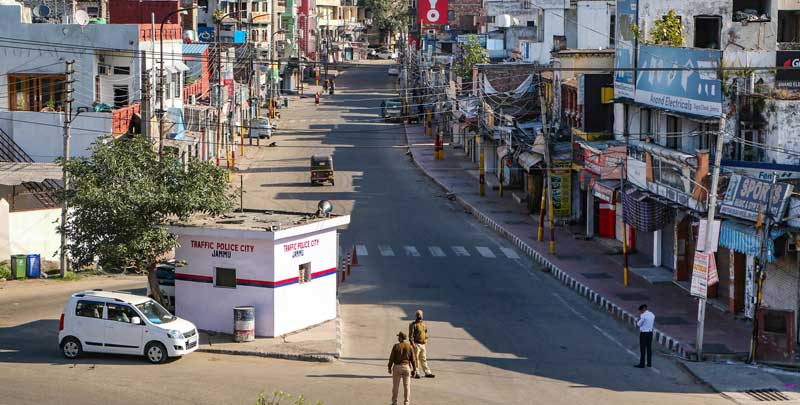 Jammu, Sep 21: Jammu Bandh called by Chamber of Commerce and Industry, Jammu, against setting up of 100 new Reliance Smart Points in the region Tuesday got the support of Bar Association and other political parties.

In a statement Jammu wing of J&K High Court Bar Association president M K Bhardwaj also extended support to the strike stating, “the people of Jammu are united on all issues which affect the common man.”

“We will not tolerate injustice and discrimination with Jammu region and continue peaceful agitation to safeguard the interests of the people,” Bhardwaj said.

He hoped that Lt Governor Manoj Sinha and his administration would take note of the problems being faced by lawyers, traders, businessmen, farmers, unemployed youth besides the civic and infrastructural deficiencies in Jammu region and address the same to make life easier for the people.

Meanwhile, Traders and Apni Party activists on Tuesday staged protests separately against the opening of Reliance retail stores here while a local industry body has given a strike call for September 22 on the issue, evoking widespread support from opposition parties, lawyers and various social groups.

The Jammu Chamber of Commerce and Industries (JCCI) alleged that businessmen in Jammu are facing the “highest degree of discrimination” due to the “directionless policies” of the Union Territory government like ending of age-old biannual darbar move, new excise policy and restrictions on banquet halls, among other issues.

A group of traders under the banner of Warehouse Traders Federation staged a peaceful protest at Nehru Market here against the opening of a chain of Reliance smart stores.

Federation president Deepak Gupta, on the occasion, said all shopkeepers would observe a complete strike on Wednesday to convey a message to the government that “we are not happy with the policy decision taken in closed rooms without consulting stakeholders”.

Activists of the Apni Party, which had already extended its support to the strike call, also staged a demonstration at Gandhi Nagar market against the proposed opening of 100 Reliance stores.

The protest was held by the Apni Trade Union and concluded peacefully, officials said.

J&K Congress chief spokesperson Ravinder Sharma said the party fully supports the bandh call on the burning issues which is bound to wipe out small and middle class traders. kno