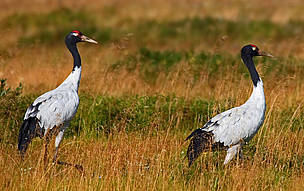 Srinagar, Sep 01: Nearly two years after reorganization of the erstwhile state of Jammu and Kashmir, the administration of Ladakh has declared snow leopard as state animal and black-necked crane as state bird for the Union Territory.

A notification in this regard was issued by the UT’s Forest, Ecology and Environment.

The black-necked crane, which was also the state bird of erstwhile state of J&K, is found only in Ladakh in India.

Classified as vulnerable, black -necked crane is a tall bird with a height of about 1.35 m, a wingspan of about 2-2.5m and weighs about 6-8 kg with a bright red crown on the head. Usually seen in pairs, their courtship dance has inspired one of Ladakh’s famous folk dances – Chartses.

The mountainous region of the western and eastern Himalayas is the habitat of snow leopards in India. They are primarily found in Ladakh, Jammu & Kashmir, Himachal Pradesh, Uttarakhand, Sikkim and Arunachal Pradesh.

It is pertinent to mention that Hangul was state animal of the erstwhile state of Jammu and Kashmir which also comprised Ladakh. kno