Says it has given up on its promises, commitments made to people of J&K 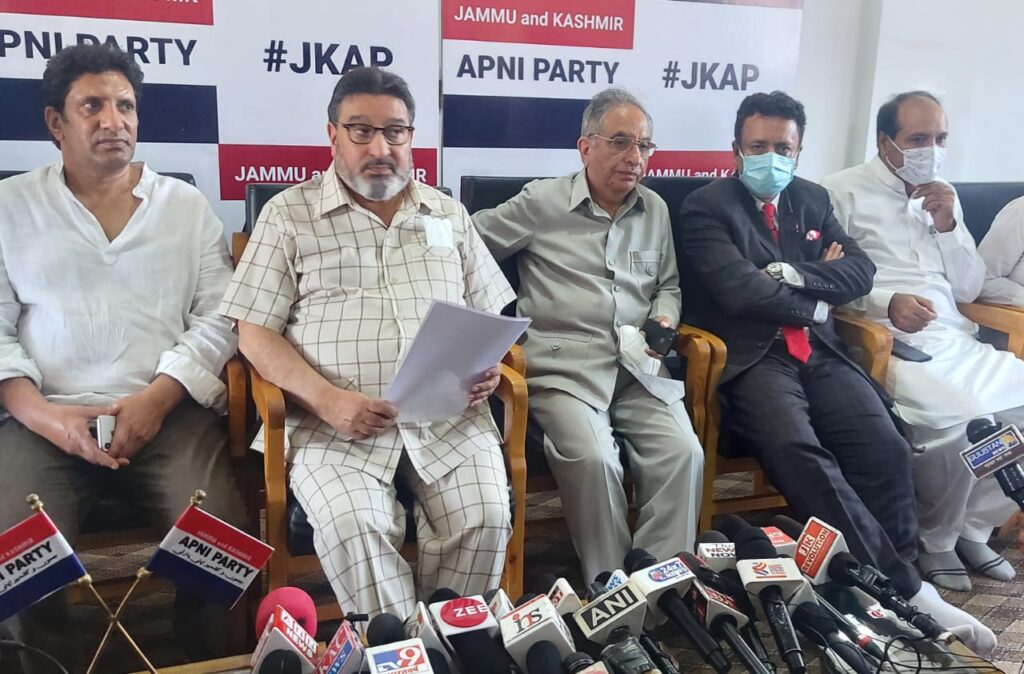 Srinagar, Aug 30: Former minister and Apni Party president, Syed Altaf Bukhari on Monday said that his party fails to understand the agenda of Peoples Alliance for Gupkar Declaration (PAGD) and asked whether the conglomerate has forgotten its promises done with the people.

Addressing a presser here at party office, Bukhari said that the PAGD made high and tall claims when it came into existence, but the conglomerate recently participated in the meeting of nearly two dozen opposition parties, which later come up with the statement as well.

However, he said that the opposition parties didn’t even mention a single word vis-a-vis restoration of Article 370, indicating that the conglomerate has given up on its basic agenda.

“I assure people that whatever Apni Party has said, it is committed to that,” he said, while demanding early restoration of statehood and also employment package for the youth in Jammu and Kashmir.

He also hoped that the Supreme Court will give its verdict on Article 370 in favour of the people of the Union Territory.

Bukhari also demanded swift action against corruption, and said that the government must start its process from the political class.

Later while addressing the media persons, Bukhari said that Apni Party remains firm on its pragmatic stand and doesn’t change narrative with regards to the situation, place or audience.

“There is no room for shifting stands in Apni Party while as we see that PAGD on one hand is speaking about the ‘No Compromise’ on Article-370 and 35A but on the same time it becomes a signatory to Opposition memorandums that don’t even mention about the restoration of these special Laws. PAGD is trying to keep the people away from development based politics through its hollow and emotional slogans. It is only because its constituents don’t want to be held accountable for their dismal failures and historical blunders committed from time to time for the sake of power,” he as per a party statement.

He said it seems that the major constituents of PAGD are unable to comprehend the fast changing geo-political dynamics in the region and want people of J&K to perpetually get consumed to the nefarious designs of the forces inimical to peace.

“These parties continued to cling to power despite hundreds being killed and thousands being blinded under their noses. However, fear-mongering still remains a vital tool in the hands of PAGD in order to secure its vote bank as these factions want to regain their lost credibility and relevance among the people of J&K,” he remarked.

Bukhari said that Apni Party has not only safeguarded the socio-economic and legal rights of the people but also ensured measures by the government of India to create an enabling and peaceful atmosphere in Jammu and Kashmir.

“We are also desirous of Restoration of Special Status to J&K and we expect a favorable decision by the Supreme Court in this regard. Even if the Apex Court’s verdict disregards peoples’ aspirations, Apni Party will pursue the same with the leadership of the country,” he observed.

Referring to the remarks made by President Ram Nath Kovind during his recent visit to J&K wherein he said, democracy has within its capacity to reconcile all differences; Bukhari reiterated Apni party’s demand for restoration of Statehood and early elections in J&K.

He said that the grievances of the people are addressed by an elected and accountable government and cannot be substituted by any bureaucratic regime.

“Our demand assumes more significance in view of the remarks made by the Parliamentary Committee on Home Affairs which in its recent visit to J&K expressed satisfaction over the security situation saying that militancy is at an all-time low and there have been no instances of stone pelting in the Valley,” he observed.

Bukhari demanded that the process of delimitation should be expedited as it can catalyze the electoral process in J&K.

In the meeting, Apni Party leaders demanded a thorough security review of political activists so that they can continue with a hassle-free political process across Jammu and Kashmir.

“Security of political activists, irrespective of their party affiliations, needs to be reviewed. Besides, we would also like to appeal to other political parties to stop their two-hoot policy and join Apni Party’s pragmatic politics in order to prevent further loss of life in J&K,” Apni Party leadership observed.

They also raised serious concerns over the exponential increase in unemployment rates while seeking stern actions against those involved in corruption irrespective of their position and status.

“Regularization of casual laborers, daily wagers, ITI Skilled, need based, HDF, NYCs, Computer Operators and consolidated workers is a must. Similarly, infusing capital for the revival of PSUs, disbursing of salaries, pension to PSU employees, retirees, adjudication of land compensation cases and issues faced by the mining sector across J&K need to be resolved once for all,” they said.