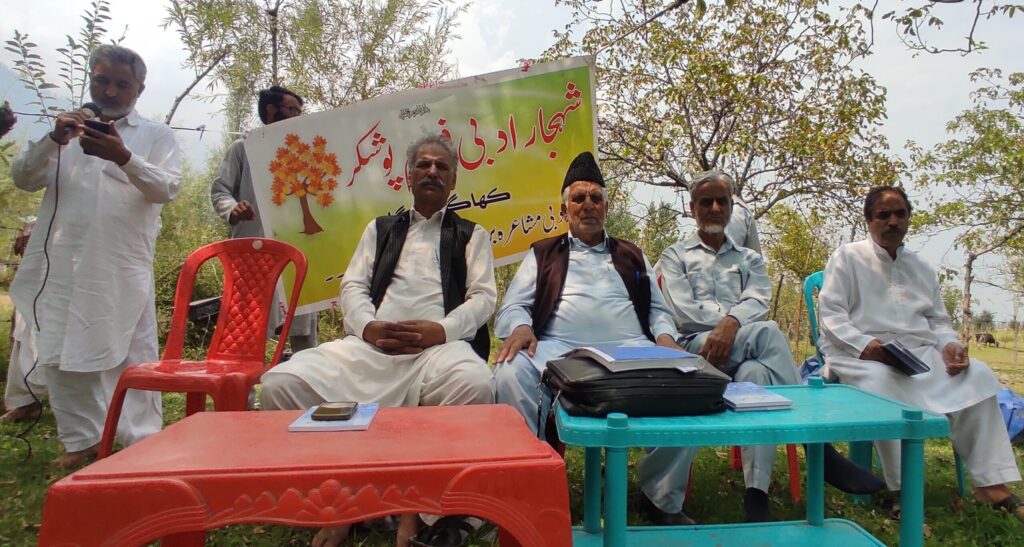 Budgam: A day-long literary and cultural event was held on Thursday in Khaipora – in foothills of Tosamaidan forest by Shehjaar Cultural Forum Poshkar which was attended by the renowned poets, senior citizens and literary persons from across the valley.

The event started at 11 am with the recitation of Holy Quran and was followed by the presidential speech of the event.

During the presidential speech Ghulam Mohammad Sheikh Shadab throw light upon the urge to organise the cultural event in contemporary times.

Assadullah Asad, Tanha Shehlipori and Naiem Kashmir were the chief guests of the event.

Speaking on the occasion, Abdul Rahman, an author, renowned who was also a guest of the occassion said that there is need to preserve the Kashmiri language.

He said, “no doubt we may belong to different faiths and classes but we should never forget that we all represent one culture and one language for which we are known in the entire globe.”

He asserted that being Kashmiri is our basic identity and we should be proud of it. “Our culture is rich and needs to be celebrated rather than sidelined under the influences of other cultures and languages that travelled to this land from other areas.”

He added that no doubt that cultures and languages assimilate from each other and thus enrich their ambit but disowning one’s own culture at the cost of adaptation of any entirely new culture is not only stupid but suicidal as well.