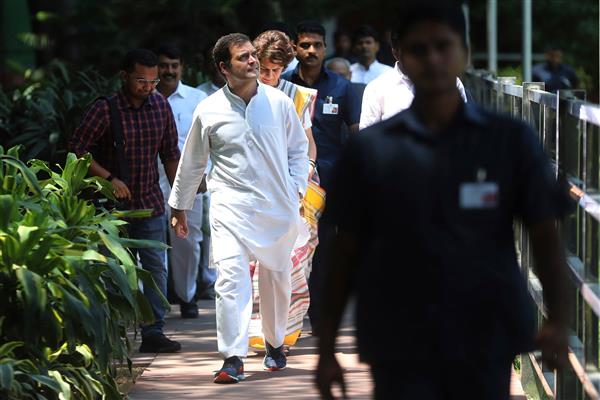 Srinagar, Aug 10: Stating that J&K was “under the direct assault from New Delhi”, All India Congress Committee (AICC) General Secretary Rahul Gandhi Tuesday said and the Government of India should restore full statehood to J&K and conduct the elections in a free and fair manner.

Rahul, who arrived in Kashmir on a two-day sojourn, also said that he is fighting against Prime Minister Narendera Modi and his policies of “dividing India” and he will continue his fight till he wins. Addressing a gathering at J&K Congress headquarters at Moulana Azad Road here, Rahul said today there is not the assault on J&K only but other parts of India also like Tamil Nadu, Bengal and other States. “But one thing is clear that J&K is under direct assault from New Delhi while other parts are facing an indirect attack,” Rahul thundered from the pulpit.

He said Congress party has a clear stand for J&K. “Statehood should be restored in full and there should be Assembly polls in a free, fair and transparent manner,” Rahul said.

Replying to senior Congress leader Ghulam Nabi Azad’s suggestion regarding seeking a bill in the parliament to press for restoration of Statehood for J&K, Rahul said: “ I am not allowed to speak in the parliament. I can’t speak about Raffle, unemployment and corruption. They (BJP) have attacked judiciary, Lok Sabha and even the voice of media stands muzzled. Journalists can’t write what they want to.”

He said that when there was a Congress government in J&K, major schemes like Udaan were launched and Panchayat polls were held.” “We brought experts to Kashmir University and sent Kashmiri youth to other states of India. But they (BJP) attacked this process too,” he said.

Rahul said that he can feel the pain of people of J&K. “My message to you is that I am with you to build a relation based on love and honour. I am fighting against PM Modi. My fight is against Modi’s ideology and violence he is preaching besides his mission of breaking India. I will continue to fight till victory,” the Congress leader said.

He said J&K people have an age-old culture of love, honour and whatever “you want to do for people J&K should be based on love and honour.” “If you start your hatred for people of J&K, nothing can be achieved, “Rahul said in an obvious reference to BJP. He said earlier, during Covid and post abrogation of Article 370, he tried to visit J&K, but was denied all the time,” he said.