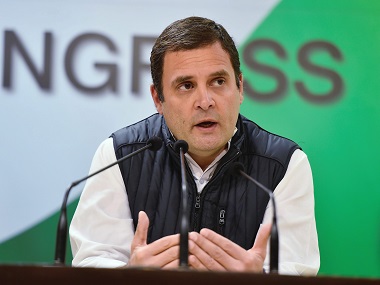 Srinagar, Aug 09: Senior Congress leader and member parliament, Rahul Gandhi on Monday evening arrived in Srinagar for a two-day visit and was accorded a warm welcome at the Srinagar airport and guest house at Church lane.

Sources said that Rahul Gandhi arrived at the Srinagar airport at around 5 pm and later reached the guest house at Church Lane.

They said that he was accorded warm welcome by senior leaders and party members at the airport and guest house respectively.

Sources said that Rahul Gandhi is scheduled to visit Ganderbal on Tuesday where he is going to pay obeisance at Kheer Bhawani temple.

“Later, he will address function at party head office at MA road in Srinagar and later he is scheduled to attend a marriage ceremony of J&K PCC chief Ghulam Ahmad Mir’s son at Taj Vivanta,” they said.

Sources said that Rahul Gandhi will leave for Delhi at around 3 pm on Tuesday.

Notably, this is Rahul Gandhi’s first visit to Jammu and Kashmir after the abrogation of Article 370 and 35-A on August 05. kns