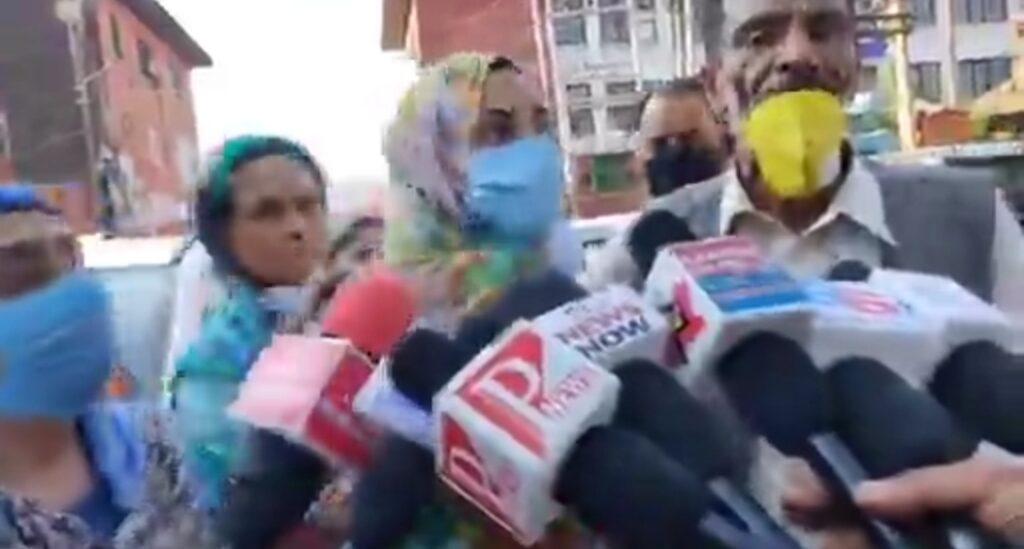 Srinagar, Jul 09: A family from Hokersar-Shikargah area of Srinagar outskirts Friday alleged theft of gold worth lakhs of rupees, cash and pashmina shawls during the nocturnal raid on July 7 and July 8 by the “men in uniform.”

The distressed family members appealed to the IGP Kashmir Vijay Kumar and SSP Srinagar Sandeep Choudhary to investigate the matter and to book those involved in the act of theft.

The family members, women, girls and elderly, staged a protest at press colony Srinagar that at 1:40 am on July 7, men wearing army uniform, holding guns in their hands, knocked the door of their house on the pretext of carrying out the search.

“We were deep in sleep as it was dead of the night. They knocked the doors repeated and when my uncle opened the main door, they told us not to be afraid as the cordon has been laid outside and they were just to carry out searches,” said Khushi, a family member, whose house has been looted.

She said that the men in uniform told them to assemble in one room so that they can carry out searches properly. “They snatched our mobile phones and went upstairs. They sought keys to open our lockers and cupboards and wardrobes. They asked us not to make noise,” she said, adding that, “we tried to resist and then they told us since there was an encounter in the area recently, they had to carry out searches.”

Khushi further alleged that when the family members went upstairs after the men in uniform left their house, they found all gold items worth lakhs of rupees, cash and Pashmina shawls were missing from the cupboards.

“We approached the concerned police station where we were told come at 10 am. We have lodged a complaint there, but nothing has happened. We are three sisters and had managed to buy gold after saving hard earned money,” said Khushi, who was accompanied by other family members, and other women of the area.