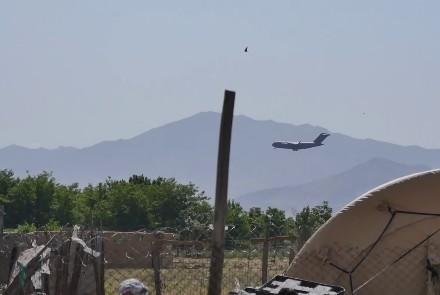 Kabul: After nearly two decades, the US military has left the Bagram Airfield in central Afghanistan and has handed it over to Afghan National Defense and Security Forces, sources from the Ministry of Defense confirmed, the Tolonews reported.

At its peak, the airfield, located 69 kilometers north of Kabul in the central province of Parwan, saw more than 100,000 US troops pass through its compound, reports said.

The handover of the airfield to Afghan forces shows that last of the roughly 2,500 to 3,500 US troops have left Afghanistan, added reports.

Ahead of leaving the base, reports said, dozens of trailer trucks loaded with scrap from destroyed vehicles and equipment that belonged to American troops were leaving the Bagram Airfield on a daily basis.

Those who purchase the material say that so far, the scrap has been worth millions of dollars, added reports.

Some residents of Bagram said that such equipment should have been handed over to Afghan forces instead of being scrapped by the US military. But US forces have said the equipment will be scrapped so it does not fall into enemy hands, added reports.

“The Afghan government has said that equipment worth $1 billion will be handed over to the Afghan forces.”

Bagram Airfield has been the biggest airbase of the US military in Afghanistan over the last 20 years. US forces started a withdrawal on May 1, a process that is expected to be completed earlier than the given deadline – Sept. 11, said reports. (Tolonews)