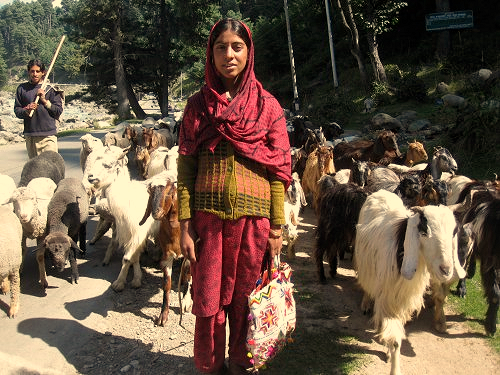 Srinagar: Jammu and Kashmir government has initiated the first enumeration and survey of migratory tribal population in higher reaches with an aim to formulate plan for extending benefits to migratory population for their socio-economic upliftment.

The survey will serve as baseline for allocation of funds for different schemes planned to cover the migratory population.

The Tribal Affairs Department in collaboration with District Administration and District Planning & Statistics organisation has initiated the survey with set deadlines for completion of various stages.

A common format developed for the survey includes details related to migration route , family particulars, educational status, health and animal husbandry facilities, Livelihood and skilling requirement among other parameters. On completion of family the process of digitisation and smart card with complete family details will be initiated. The smart cards will serve multiple purposes for a range to facilities to be extended to the tribal migratory population.

It was informed that based on the survey a range of different facilities will be provided by the department which include transit facilities , livestock services, healthcare, education, Livlihood initiatives, essential services and infrastructure. The Tribal Affairs Department will provide assistance to migratory nomadic families under various schemes. The plan also includes capacity building of the nomadic population.

Choudhary informed that survey will cover intra-district, inter-district, inter-province and inter-UT/ State. A list of 14 major migratory routes was discussed in the meeting and district teams were asked to minutely work on the migratory routes and suggest facilities required for the population. He also asked for active association of PRIs, stakeholders and community representatives for ensuring fool-proof planning and development as an outcome of the survey.

The department has also instituted three awards for best performing districts which will include cash award and medal — Gold, Bronze and Silver. Meanwhile Chief Planning Officers and Districts Statistics & Evaluation Officers registering best performance will be honoured with cash awards of 50,000 rupees, 30,000 rupees and 20,000 rupees with Citation and Gold , Silver and Bronze medals. The CPOs and DSEOs will also conduct a host of studies on tribal culture , art, languages, traditional practices, livlihood measures, education and socio-economic conditions. Department will provide funds for all such innovative studies and documentarians.

The survey is likely to be completed by 31 July 2021. Tribal Affairs Department has earmarked a budget of 3 crore rupees for the first enumeration/ survey of nomadic migratory population for providing targeted benefits and assistance to community in a phased manner. These initiatives include healthcare facilities, livestock health, Rights awareness, education, skill development, tribal products marketing and a number of other support initiatives.

Department is also coordinating with districts in Ladakh UT, Punjab and Himachal for information on inter-state/UT migration.