‘Election process will begin in J&K after delimitation’: Modi at all-party meet 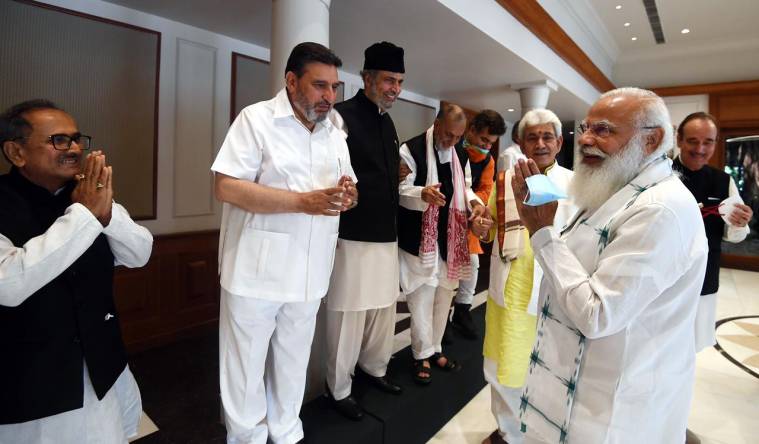 Srinagar: After meeting with leaders from Jammu and Kashmir, Prime Minister Narendra Modi said that the “delimitation has to happen at a quick pace so that polls can happen and J&K gets an elected government”.

He said his government’s priority was to strengthen grassroots democracy in J&K. He said today’s meeting with political leaders from Jammu and Kashmir was an important step in the ongoing efforts towards a developed and progressive J&K, where all-round growth was furthered.

“Our priority is to strengthen grassroots democracy in J&K. Delimitation has to happen at a quick pace so that polls can happen and J&K gets an elected Government that gives strength to J&K’s development trajectory,” the Prime Minister said in a series of tweets.

This was the first all-party meet with key leaders from Jammu and Kashmir after the abrogation of Article 370 in August 2019.

After meeting with the leaders, the Prime Minister said: “Our democracy’s biggest strength is the ability to sit across a table and exchange views. I told the leaders of J&K that it is the people, specially the youth who have to provide political leadership to J&K, and ensure their aspirations are duly fulfilled.”

Home Minister Amit Shah said that the Centre was committed to ensure all round development of J&K. He said the future of Jammu and Kashmir was discussed and the delimitation exercise and peaceful elections were important milestones in restoring statehood as promised in parliament.

“Today’s meeting on Jammu and Kashmir was conducted in a very cordial environment. Everyone expressed their commitment to democracy and the constitution. It was stressed to strengthen the democratic process in Jammu and Kashmir,” Shah said.