-Put Forth 5 demands including restoration of statehood: Azad; Told PM we don’t stand with decision taken on Aug 5, 2019: -Omar Abdullah; Will fight for months or even years to get back special status as it wasn’t given by China or Pak, but Nehru& Patel -Mehbooba Mufti; Hopeful about some delivery for people of J&K - Sajad Lone; PM assured us assembly polls soon after delimitation process 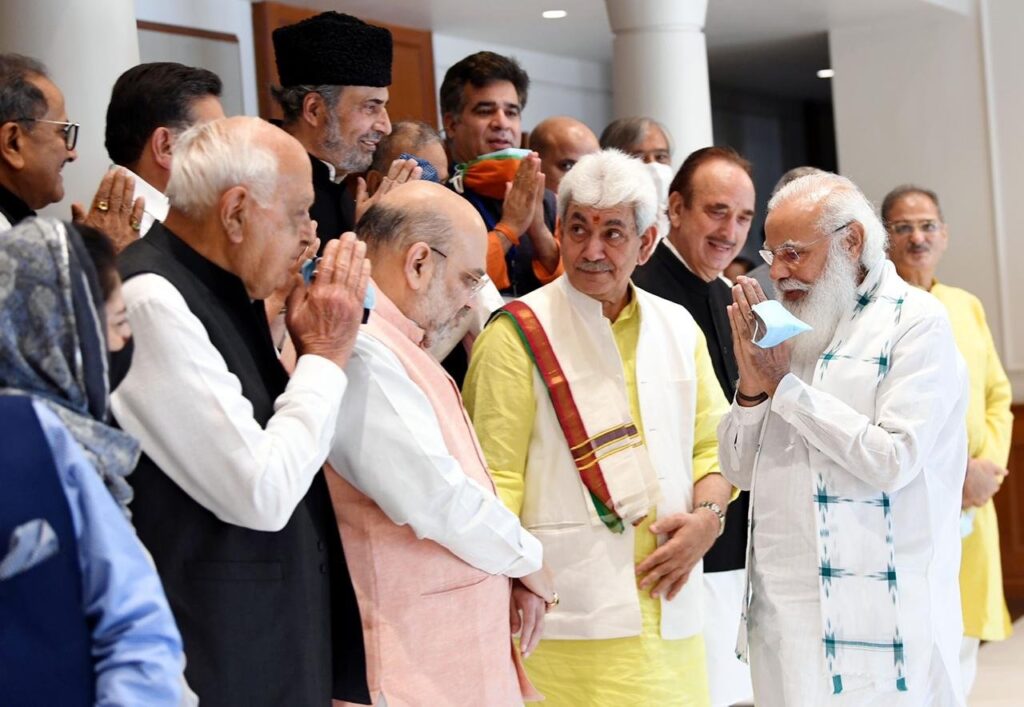 New Delhi, Jun 24: Restoration full statehood and article 370 to J&K were among series of other demand that dominated the crucial All Party Meeting (APM) of Jammu and Kashmir politicians chaired by Prime Minister Narendera Modi in New Delhi and co-chaired by Union Home Minister Amit Shah on Thursday.

Among other issues raised by the leaders of political parties were roll back of domicile laws, holding assembly elections and guaranteeing the land laws and job rights.

J&K leaders, who participated in the meeting said it was held in a very cordial atmosphere and the Prime Minister gave a very patient hearing to all the participants who put forth their views on various political issues related to J&K.

At least 20 leaders from J&K participated in the meeting that started at 3 pm. Senior Congress leader Ghulam Nabi Azad, said that three members from the party put forth five demands before the PM, which include restoration of Statehood, conducting assembly elections, domicile rights to J&K residents only, return of Kashmiri Pandits to Jammu and Kashmir and release of political prisoners.

Talking to reporters after the meeting, PDP chief Mehbooba Mufti said that she told the PM that people of J&K are angry and humiliated post August 5, 2019. “I told the PM that the way article 370 was unconstitutionally and illegally revoked by the BJP. I told him that PDP and people of J&K will fight for months and years to get back Article 370 as we have not got it from Pakistan from China but from Pandit Jawahar Lal Nehru and Sardar Valabhai Patel and that restoring special status was highly inevitable,” she said.

The PDP chief said that she told the PM that if the Government of India is talking to China why it can’t take forward the process with Pakistan. “I told him that the fresh talks have led to ceasefire and zero infiltration and that why can’t it go further,” she said.

National Conference vice-president Omar Abdullah said that he told the PM they don’t stand with the decision taken on August 5, 2019. “We requested the PM that our fight will continue but it is essential to reverse some decisions that aren’t all in the interest of J&K. It was given the status of a UT, people don’t like it. They want full statehood for J&K with J&K cadre restored,” he told reporters after attending the meeting.

About Article 370 abrogation, Azad while talking to reporters after attending the meeting, said that majority of the leaders during the meeting have stated that the issue is already sub-judice.

Peoples Conference chairman Sajad Lone said: “The meeting was held in a very cordial manner. We came out quite positive that hopefully there will be some delivery for the people of Jammu and Kashmir.”  BJP J&K chief Ravinder Raina said that all leaders of Jammu and Kashmir have been assured by PM Narendra Modi that all will work together for the future and betterment of J&K. “PM Modi heard everyone and said that all steps will be taken for the development of the people of J&K,” Raina said.

Meanwhile, in a tweet, Union Home Minister Amit Shah said that today’s meeting on J&K was conducted in a very cordial environment and everyone expressed their commitment to democracy and the constitution. “It was stressed to strengthen the democratic process in Jammu and Kashmir,” the tweet read.

Sources told KNO that there will official press conference by the participants of the APM in Delhi tomorrow. kno