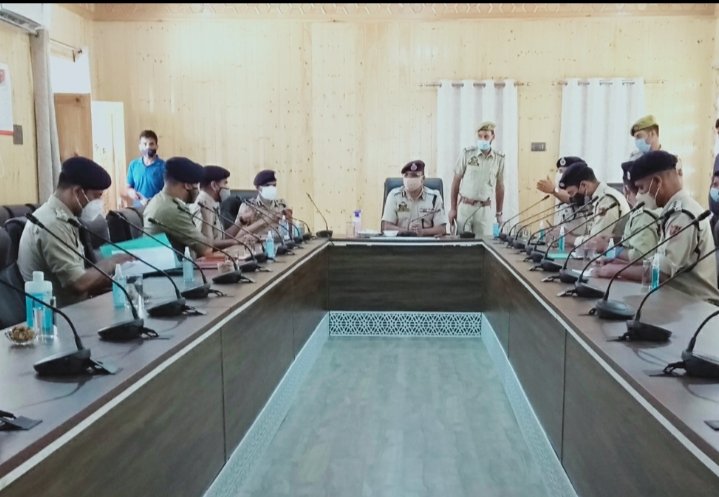 Srinagar, June 04: The Director General of Police, J&K Shri Dilbag Singh today visited Sopore Police district in North Kashmir where he chaired officers meeting to review security scenario with the jurisdictional officers of Baramulla and Sopore and also took stock of the implementations of SOPs with regard to 2nd wave of COVID-19 in these districts.

Accompanied by IGP Kashmir, Vijay Kumar, the DGP was received by DIG NKR Sujit Kumar, SSP Baramulla Rayees Mohammad Bhat and SP Sopore Sudhanshu Verma. The DGP was given guard of honour on his arrival.

At the very outset of the meeting the DGP appreciated role of JK Police personnel while enforcing the government advisories in containing the spread of 2nd wave of COVID-19. He said that besides performing routine professional duties in handling various challenges J&K Police along with other govt forces is playing an important role in managing COVID-19 crises. He appreciated the commitment and resolve of Police & other forces in providing helping hand to the people and at the same time acting tough against the violators.

The DGP stressed upon officers to strengthen the security arrangements as Pakistan and its sponsored elements are looking for soft targets to foment trouble. He said that successful anti terror operations strengthen peace and the grip over the situation is to be maintained as it has been achieved after a lot of hard work by forces. He directed to keep a close eye on anti national elements which provide assistance to militants and stressed all such persons should be booked under the law.

The DGP directed the officers to gear up and put extra efforts to create more conducive atmosphere for the people of Jammu and Kashmir. He directed the officers to brief the protected people not to move without their escorts and PSO. He also directed that all personnel performing their duties with protected people should be briefed from time to time and also be given refresher training. He also stressed for ensuring tight security nakas to restrict the movement of anti national elements who are making every effort to disturb the peace in Jammu and Kashmir.

The DGP said that besides strengthening the security grid, anti social activities need to be under check. He said that because of drug abuse some of our young people are indulging in criminal activities. He said that the war against drugs need to be taken to next level and all people involved should be put behind the bars. He stressed upon officers to engage more and more youth in sports and talent hunting activities once the COVID crisis comes to an end.

Earlier the DGP was briefed by DIG NKR Sujit Kumar, SSP Baramulla and SP Sopore regarding the security scenario and police response on COVID-19 front in their respective areas.