Ready For Amarnath Yatra But Decision Lies With Civil Admin 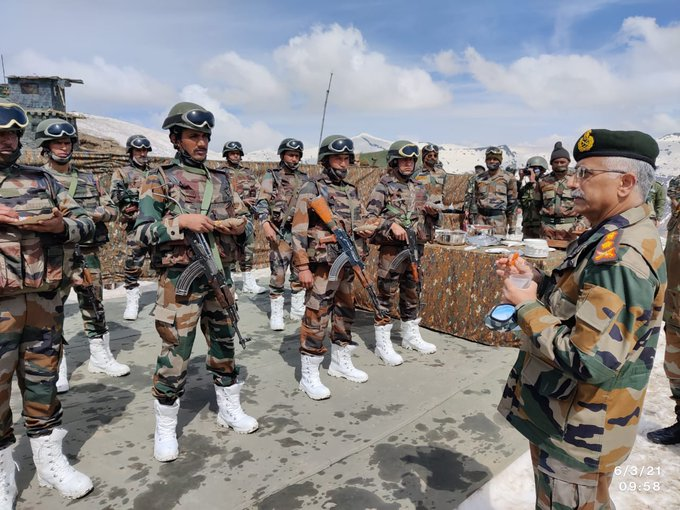 Srinagar, June 03: Army Chief General MM Naravane has said that the onus of building trust lies on Pakistan as the situation can not be changed between India and Pakistan  overnight.

Narvane who is on a two day visit to Kashmir to review security and operational preparedness along the Line of Control (LOC), said:

“Onus of holding it further lies on Pakistan. As long as they do so, we will hold it. While it (ceasefire) is on, other activities Pakistan is indulging in are militant infrastructure, camps-and militants. This continues…,”.

“Therefore, there can be no lowering of guard as far as levels of alertness and preparedness is concerned. Trust is a difficult thing to come by, it takes a lot of time to build. So situation on that score can’t change overnight”.

The army chief said that if Pakistan stops “desisting from pushing militants from across and fomenting trouble in India, then all these steps will help build up the level of trust between the two countries further.

“But, I reiterate onus is on Pakistan,”

The army chief also reviewed the security situation along the LOC in Kashmir. During his visit to LOC, the COAS  interacted with the troops and complimented them for their high morale and the high state of operational preparedness.

In a surprising development, Indian and Pakistani armies announced that they had agreed to observe a ceasefire along the LoC in Jammu and Kashmir from the midnight of February 24.

During the announcement, it came to fore that  Director General Military Operations of both countries “agreed to address each other’s core issues and concerns which have the propensity to disturb peace and lead to violence” in the interest of “achieving mutually beneficial and sustainable peace along the borders”.

The move came at a time when the Indian army is largely focused on the standoff with China in Ladakh sector of the Line of Actual Control (LAC), which emerged in the open in May last year, though there has been no let-up in counter-militancy operations in Jammu and Kashmir.

“If situation permits, can pull-out some troops from active deployment areas of J&K”

Army Chief General M M Naravane said there was a “sense of normalcy prevailing” in J&K and if situation permits, army can pull-out some of its troops from active deployment areas but the soldiers won’t be withdrawn altogether.

Speaking to a selected group of journalists mostly those representing national television channels, at JAKLI Centre Rangreth on Srinagar outskirts, the army chief said that they have counter-infiltration grid in place to prevent infiltration along the Line of Control and also the counter-militancy grid to tackle militancy in the hinterland.

“All these deployments are dynamic and they depend on situation and threat perception. We do review deployment from time to time. If we feel and the situation permits, we can take the course of pulling out some troops from the active deployment areas to rear areas so that they get time to relax, but they will not be pulled out altogether,” he said in reply to a query whether army was mulling to cut the size of its men in J&K given the prevailing peaceful atmosphere in Kashmir. He, however, admitted that there was a “sense of normalcy prevailing in J&K, especially Kashmir. “There have been a very few militant activities and stone pelting and IED related incidents. This indicates a sense of normalcy. People also want same and it is a good thing. After a long time, we have reached to the level where peace prevails,” he said.

ABOUT AMARNATH YATRA: Army is ready to ensure smooth Amarnath pilgrims even though the final decision to conduct the Yatra lies with the civil administration. “We ready and prepared to ensure smooth pilgrimage if civil administration decided to go ahead,” the army chief said. On April 22, the Shri Amarnath Shrine Board (SASB) announced temporary suspension of the registration of pilgrims for the annual Yatra. The board had started registration of pilgrims online from 15 April for the Baltal and the Pahalgam routes, which leads to the cave shrine. The 56-day yatra would start from June 28 if the shrine board and the J&K government decides to go ahead with it. In a message to the people of J&K, especially youth, the army chief said that people in general, not only youth, should shun path of “violence” for better future. “After such a long time, we have reached a situation where peace and tranquility prevails, where people are able to perceive their dreams and aspirations,” he said, adding that “My message to all, not only youth, would be that when there is peace and tranquility can there be development and when there is development, we will all prosper. Youth should shun path of violence as it will not take them anywhere. “He said: “See how world has moved on and how India has moved on; therefore embrace the future and future lies in shunning the violence.” He said that peace in Jammu and Kashmiris “a joint approach of people, government, and the security forces.”

In this overall approach, army’s role is to bring down levels of violence to an extent where civil administration and local security forces can play their role in the development of J&K. The army’s role is to worth with synergy with government and other security forces,” he said. About Covid-19, he said that entire country is fighting an open war against the pandemic” There is not a single family which has not been affected by Covid. It is our responsibility as armed forces of the nation in this hour of need to do whatever we can do for the help of our citizens,” he said. “We have left no stone unturned and spared no resources in helping out in this hour of grief. I am happy to say that overall number of cases in the country are declining. Let me tell you that we are prepared to fight the third way if it may occur.”Naravane arrived in Srinagar on Wednesday to review the security along the LoC and hinterland. He visited forward posts along the LoC and received feedback from the army officials on ground about prevailing ceasefire, infiltration. In Srinagar, GoC 15 Corps Lieutenant General D P Pandey briefed the army chief about militancy, anti-militancy operations, local militant recruitment and other security related issues. He also met LG Manoj Sinha and discussed present situation in J&K. He flew back to Delhi on Thursday afternoon