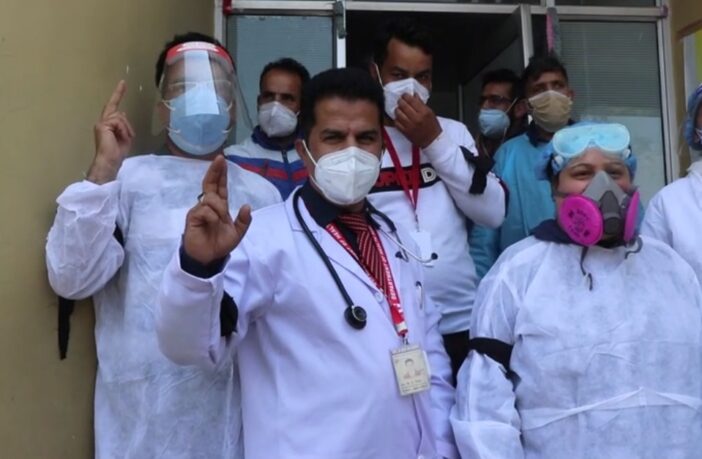 The protest was held in all Kashmir districts including Srinagar. The protesting doctors and health workers, while speaking to news agency Kashmir News Trust, said that Baba Ramdev has no right to speak ill of allopathy and demanded an ‘unconditional’ apology from the Yoga Guru.

President of one of the factions of DAK, Mohammad Yousuf Tak resented the recent controversial statement of Baba Ramdev, saying the Baba was attempting to promote his own business by projecting medicos and scientific medicine as inefficient.

“He has humiliated medical fraternity openly and created mistrust among the masses over scientific medicine and doctors. He should not be let go and appropriate action should be taken against Baba Ramdev,” he said.

In South Kashmir’s Pulwama district the protest demonstration was held in the premises of Mohammadia Nursing Home in Gangoo. The private Nursing Home was requisitioned by the district administration after District Hospital Pulwama was declared as a Covid-dedicated hospital in May.

It is pertinent to mention that doctors across the country are observing a Black Day in protest against the remarks made by Yoga guru Baba Ramdev on allopathy and modern medicine.

Staff at several hospitals nationwide held demonstrations, holding placards and calling for the arrest of the founder of Patanjali Ayurved. Medical associations have also sought an “unconditional open public apology” from him for his remarks.

Issuing a call for protest on May 29, the Federation of Resident Doctors Associations (FORDA) had emphasised that healthcare services will not be hampered due to the stir. knt