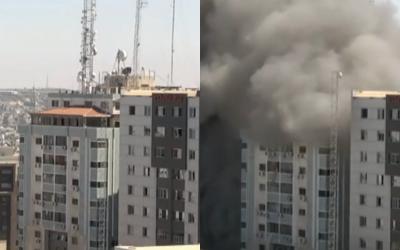 Jerusalem: Israel has bombed a building in Gaza used by a number of news outlets, including Middle East Eye, Al-Jazeera and the Associated Press, the Middle East Eye reported.

Reporters and media workers said they had fled the al-Jalaa tower in Gaza City after being issued a one hour notice by the Israeli army, who later destroyed the building, reports said.

Mohammed Hajjar, a photojournalist for MEE, was among those who left the building, reports added.

Speaking by phone, he said he had left his laptop behind, but had managed to grab his hardrive and camera. He said the evacuation was a scene of panic and chaos as people rushed to take whatever they could and get out as best as they could, reports added.

Returning to re-inspect the remains, there was only wreckage, reports said.

“There’s nothing left but our memories,” he said.

“So far no casualties have been reported”.

The 12-storey building contains 60 residential units, with a number of offices for international media including Al Jazeera, the Associated Press, as well as Arab and local press, reports said adding a number of journalists tweeted about the incoming strike, reports said.

“And now bombs could fall on our office. We ran down the stairs from the 11th floor and now looking at the building from afar, praying Israeli army would eventually retract,” wrote Fares Akram, AP’s Gaza correspondent”.

Shortly before the strike, Al Jazeera aired a phone call between the owner of al-Jalaa and an Israeli intelligence officer, media reports said.

The owner, named by Al Jazeera as Abu Hossam, asked to be given more time to evacuate equipment from the offices, reports added.

“There’s no bad people here, just journalists,” he was quoted as saying. “Just give us 10 more mins to get the cameras out.”

“Do what you want, we cant stop you. Our lives’ work is gone, our memories are gone, our lives are gone, we have God to turn,” reports quoting Hossam said. (Middle East Eye)