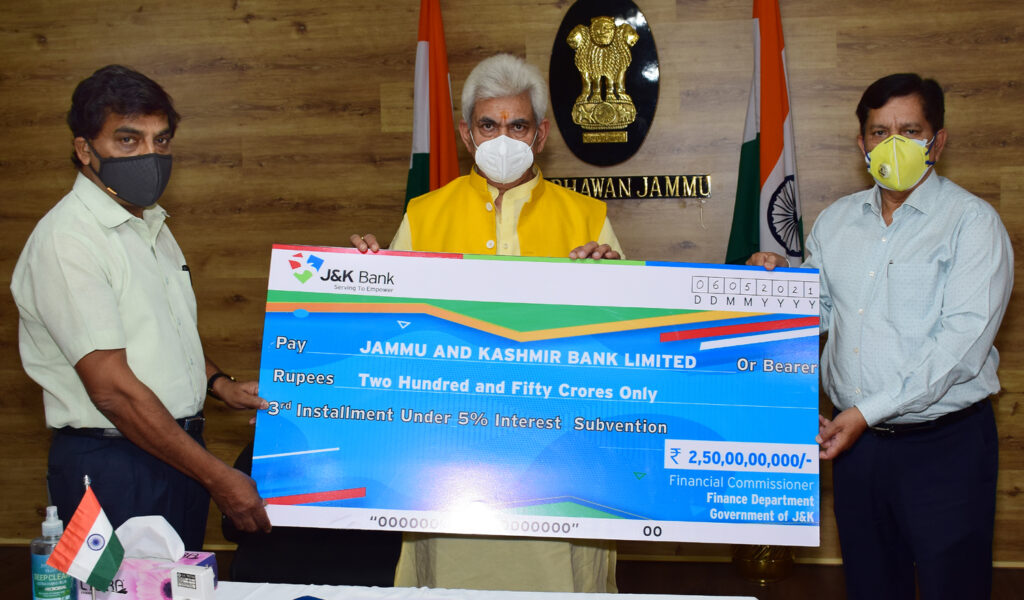 JAMMU, MAY 06: Lieutenant Governor, Manoj Sinha today approved the further release of Rs 250 crore as Interest Subvention, part of economic package for revival of business and industry in J&K, and handed over a cheque of the said amount to Jammu and Kashmir Bank as third instalment of the 5% Interest Subvention.

Government of J&K had already released Rs 500 crore so far, and today another instalment of Rs 250 crore as 5% Interest Subvention was released as part of the overall package of Rs 1353 crore. The Interest Subvention has so far provided immense relief to 3.44 lakh borrowers in the current Covid-19 crisis.

The J&K government had announced a mega Relief and Revival Package of Rs 1353 crore on September 19th, 2020 to help J&K business sector to tide over the Covid-19 crisis and other difficulties.

The business revival package involved relief measures, both financial and non-financial, aimed primarily at the sectors which had been most affected by the ongoing situation so as to achieve sustainable and continued growth.

The Lt Governor observed that the core component of the package was Rs 950 crore as 5% Interest Subvention to all borrowers. Apart from Interest Subvention, Local and MSME filters have also been operationalised on GeM enabling all departments in J&K to procure Goods and Services from the local manufacturers.

Local and MSME filters can be used together for procurements made up to Rs. 5.00 lakh from local manufacturers. For purchases above Rs. 5.00 lakh, additional terms and conditions clause can be used by the departments for restricting procurement within a geographical limit, through the process of bidding on the GeM, said the Lt Governor.

Pertinently, it was one of the important components of the economic package announced by the Lt Governor for giving boost to local entrepreneurship.

To provide further impetus to business and ensure ease of doing business, Single Window Portal has been set up and online clearances introduced. Special desks have been created to address issues of youth and women entrepreneurs in J&K Bank. An unprecedented Industrial Package was also announced, besides industry friendly policies in 14 key sectors of the economy. Not only this, about 19000 youth including women have been provided financial assistance to start their own business ventures by J&K Bank, as a follow up of the announcement made by the Lt Governor during Back to Village-3 programme.

The Lt Governor said that in coming times, the Government will continue to take further steps to boost the economy of J&K and help people to overcome the difficulties with due attention to the Business Community.

Steps taken by the Government seem to be yielding positive results. Independent reports suggest that the unemployment rate in J&K has declined significantly. Further, if GST growth is taken as indicator of state of economy, J&K witnessed a relatively healthy growth of over 2.7 % during 2020-21, a sign of resilience of economy, he added.