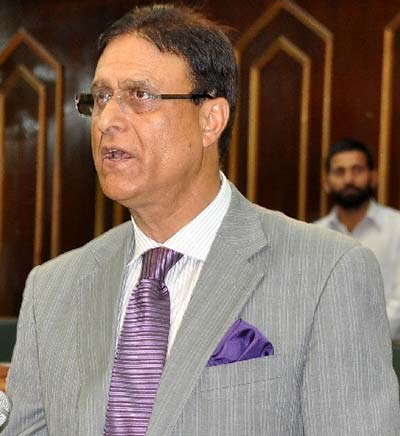 Srinagar, May 4: The Jammu and Kashmir National Conference on Tuesday impressed upon the administration to call an end to the Special Task Force (STF), saying the measure will push the people towards alienation.

A little over a week after the J&K administration set up a Special Task Force (STF) to initiate action against government employees suspected of activities “against the security of the State” under Article 311(2) (C), the Party Senior leader , and Former Minister Choudhary Muhammad Ramzan said, the General Administration Department (GAD) has issued an order in the middle of ongoing pandemic to dismiss a school teacher who is a resident of Kupwara; an Assistant professor from Kulgam, and a revenue official of Pulwama.

The reckless decision, Choudhary said, has sent jitters across scores of employees who he said are at the front of the battle to combat COVID-19. “We are living through the worst ever public health catastrophe in the shape of COVID sprawl. The Government should have focused on boosting the Covid care rather than terminating the employees in an elusive manner where the terminated cannot even resort to legal recourse to protect their rights. Those upon the suspicion have been cast have little to no legal recourse; this makes the measure more undemocratic because the Article 311(2) (C) of the Constitution gives the administration powers to terminate the services of a government employees at the drop of a hat without constituting an inquiry against the person. What adds salt to the injury is that the terminated employees aren’t allowed to defend themselves legally,” he said.

Choudhary further stated that the rushed measure has deprived three families of livelihood when the community is going through a pandemic. “Denying the legal recourse to the terminated employees is what frets every saner voice,” he said.

Impressing upon the Government to revisit the policy, Choudhary said that having such policies are unheard of in an emancipated world. “I impress upon the government to roll back the policy providing for a task force. There are ample provisions in the service rules to deal with such issues. I urge the government to reinstate the fired employees and let normal law take its recourse,” he said.