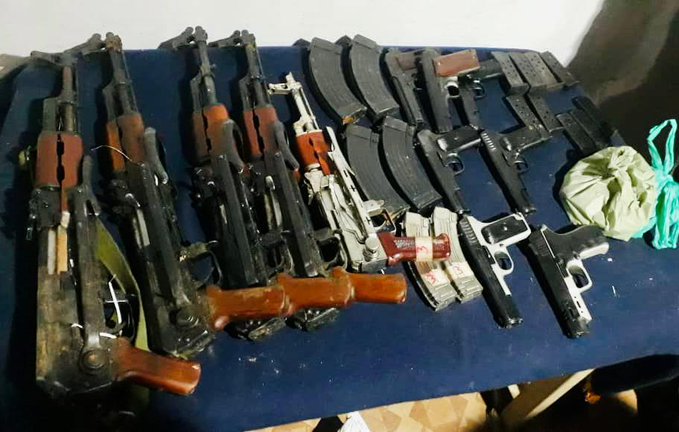 Kupwara, Mar 28: Police in Kupwara has claimed to have recovered a huge cache of arms and ammunition in frontier Karnah sector of this north-Kashmir district on Sunday evening.

An official said  that acting upon a specific information, a search operation was conducted by Kupwara Police alongside Army in the Dhani, Taad area falling under Karnah jurisdiction.

During the operation ‘huge’ cache of arms and ammunition were recovered which, as per the official, include 5 AK-47 rifles with 06 Magazines and 07 Pistols (9 Magazines) besides a sizeable amount of ammunition.

A case under FIR number 19/2021 under section 7/25 of Indian Arms Act has been registered in police station Karnah and further investigations taken up.

“Some suspects have also been taken into custody to ascertain the facts and to conclude the investigation on merits”, the official said.

“The timely recovery of huge cache of arms and ammunition has thwarted any possible untoward incident in otherwise peaceful region and has scuttled the nefarious plans of militant outfits to try derailing peace and harmony”, the official maintained.

“It was a continued demonstration of ‘preventive intelligence’ by Jammu Kashmir Police”, the official remarked.