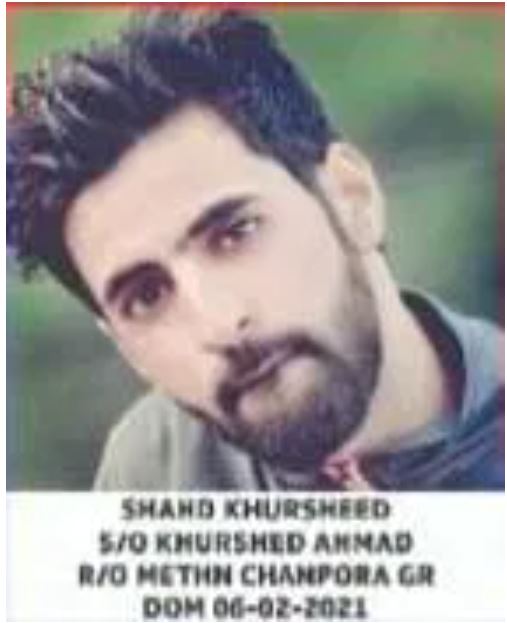 Srinagar, Mar 14: Jammu and Kashmir Police on Saturday came under severe criticism after they portrayed a student from South Kashmir’s Shopian district as one among the nine most wanted militants operating in the Srinagar city in a lookout notice that was released on Yesterday.

As per News Agency Kashmir Dot Com (KDC), the list of wanted militants which was framed by police had portrayed a different “Shahid” as Shahid Khursheed Wani son of Khursheed Ahmad, as wanted militant and he was shown as a resident of Methn Chanapora area of Srinagar, which is far from reality.

Mistakenly or deliberately the photograph in the list under the name of Shahid Khursheed is of Shahid Ramzan son of Mohd Ramzan Sheikh, who hails from Chotipora village of South Kashmir’s Shopian district and is a student by profession and has no links with any militant group.

Local sources told news agency Kashmir Dot Com- (KDC) that soon after going through the lookout notice, Shahid along with his family was shocked and they within no time approached the Police in this regard.

After facing embarrassment and realizing its mistake J&K Police rectified the lookout notice by removing the name of Shahid from the notice.

They have added a new entry replacing Shahid to Adil Mushtaq Khanday, a resident of Pampore who according to the notice has gone missing in October 2021, but October is yet to come.

IGP Kashmir Vijay Kumar told news agency KDC that the date of joining is incorrect, it is October 2020.

Regarding the first outlook notice he told KDC that Kashmir Zone Police (@KashmirPolice) had shared an authentic list of nine wanted militants operating in the city on micro blogging site twitter. (KDC)