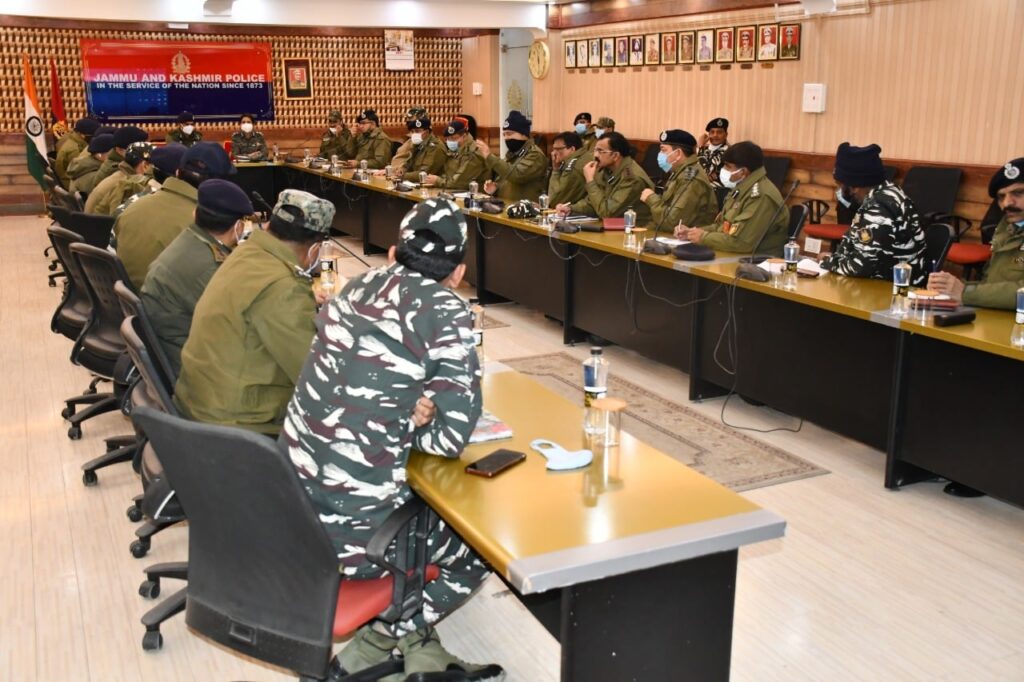 According to the statement, focus of the meeting was recent attacks by militants in the Srinagar City and the security measures to counter such militant attacks.

The participating officers presented an overview of the steps initiated by them in their respective areas to counter such attacks and other challenges faced at the ground level.

In past three days, two attacks were carried out by the militants in which son of famous Krishna Dhaba owner was shot in Sonawar area while in another attack in Bagahat, two police men were shot dead.

Later police claimed that they arrested three men who were involved in firing shots at the Krishna Dhaba owners son which inflicted fatal injuries on him.

IGP Kashmir was also briefed about the detailed security measures put in place to counter such attacks and for the maintenance of peace and security particularly for tourists as it is expected that a large number of tourists will visit valley in the coming summer season.

While interacting with the officers, the IGP Kashmir urged upon the participating officers that it is of crucial importance to enhance security surveillance of all vital establishments & locations besides to take care of vulnerable persons to thwart away the nefarious designs of militants in Srinagar city.

He also urged upon them to take all necessary measures for ensuring peaceful atmosphere in the Srinagar City.

IGP further stressed on the officers to strengthen the general security grid and to ensure better synergy & coordination among themselves and other sister agencies working at the ground level, “so that terrorists and anti national elements do not get any chance to disturb the present peaceful atmosphere prevailing in the Srinagar City”.

He also highlighted the importance of round the clock checkpoints/nakas at strategic locations , surprise ( flash ) naka ,surprise limited CASO in crowded places, placing cut-off points on exit routes immediately after such incident and dominating from high reaches, use of drones to check the movement of elements inimical to peace.

IGP also urged upon the Zonal police officers to keep close watch on “anti national/anti social elements”, besides take stringent action against such elements including trouble makers and rumour mongers.

He emphasized upon them that they have to be more vigilant and proactive on ground to ensure a peaceful atmosphere in the Srinagar City.

IGP Kashmir instructed officers to enhance surveillance and conduct anti-militancy operations in their respective areas and take all proactive steps for maintaining peace and stability in the Srinagar City.

He also emphasized upon the officers to keep strict surveillance over the militant associates and take all necessary measures under law against them.