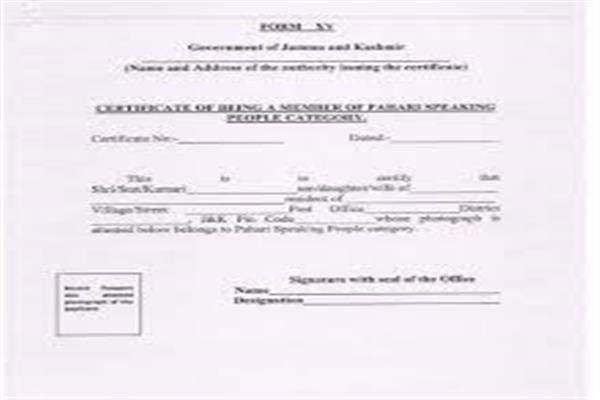 Locals said  that the due process is not being followed by the administration while issuing the PSP certificates, thereby make them suffer immensely.

“I applied for the Phari certificate in July. The basic formality I was told to do was to get the report of Lambardar and Chowkidars, but I don’t know why tehsil officials asked him to say that it was given by mistake. I am now asking them what are the parameters that were adopted earlier by him and what are the parameters now. However, no other method is adopted to verify who is Pahari, there are many files of the same nature pending, neither they are rejected nor PSP is issued,” said Iqbal Banday, a local.

Another local resident Zeeshan Budoo of Lagama village of Uri. said that he and his sister have applied for PSP scholarship many times and were always recognized by the PSP member as well while issuing the certificate. “Even in 2019 tehsil office itself issued us certificate for scholarship, but once the reservation was announced they have started denying the reservation without any legal backing,” said

Erfan Raina, a Journalist from Uri said that he was surprised that officials in Uri lack basic understanding of law. “The definition of the Pahari speaking person under S. O 127 is a person belonging to the Pahari community, caste or clan,” he said, adding that when his first cousin is a member of the Pahari speaking community whose tehsil office has issued the certificate, how can he be denied the same. “Are they defeating or killing the first line of the definition of law itself.”

Bashir Bhat, a social and political activist belonging to BPL category said, “Larger demand of Paharis was ST and SC category and it is given on the basis of caste, how is this possible that Bhat caste in Gingal area is Pahari and someone residing in Garkote isn’t.”

He also added that if they see the recent selection list of accounts assistant of SSB many people belonging to Hindu community were selected under PSP, but the observation of then DC Baramulla Dr G. N Itoo excluded this reservation for Hindus and Sikhs unnecessarily.

Meanwhile, Nazir Ahmad, Coordinator J&K RTI Movement said it’s very unfortunate that not a single written communication has been made to higher ups, seeking any clarification.

“Usually, officials in the tehsil office Uri are dodging applicants by saying there is deficiency in law. Why do officers posted in Uri expect someone from locals to visit Jammu to take up this matter with LG or the principal secretary that there is any deficiency in law,” he said.