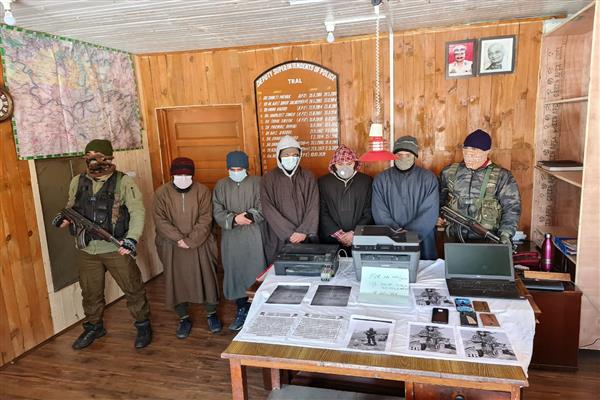 Awantipora, Jan 16:  Police claimed to have arrested 5 youth who were indulged in pasting threatening posters.

According to police spokesperson, on 13 January 2021 some threat posters of the militant outfit were found pasted in Seer and Batagund villages of Tral area. He said upon the said incident case FIR No.04/2021 under relevant sections of Unlawful Activities Act stands lodged in Police Station Tral.

“During the course of investigation, investigating team raided multiple places and rounded up several suspects. During the questioning of suspects and collection of other evidence 05 militant associates were found to be involved  in pasting of the said threat posters in Seer and Batagund area and were accordingly arrested in the said case”, police spokesperson said.

“One Laptop and a printer used for the preparation and printing of threatening posters were seized”,he said and added further investigations into the case is going on.