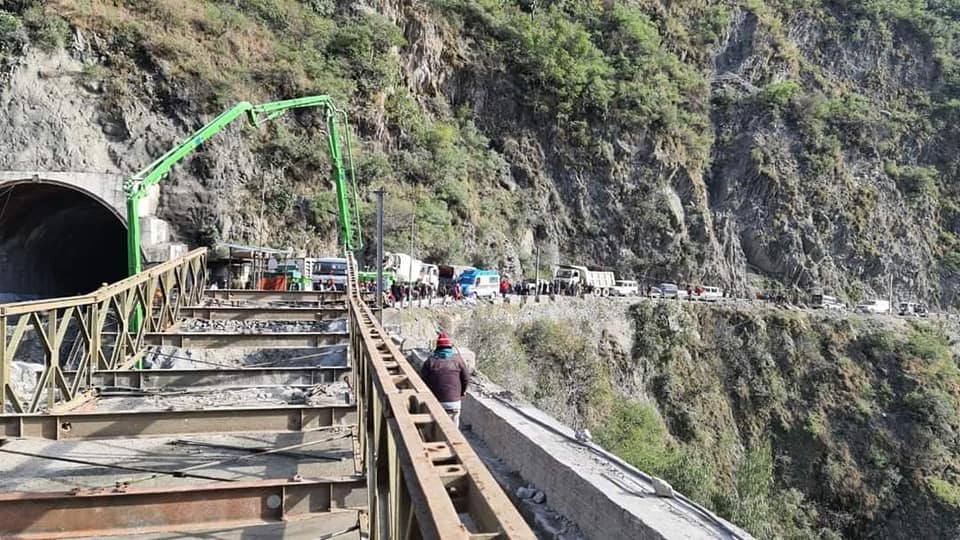 Srinagar, Jan 16: The Srinagar-Jammu highway is likely to be opened for traffic after six days of closure as trial run on the Bailey bridge was completed on Saturday afternoon.

The thoroughfare, the only surface link connecting Kashmir Valley with the outside world, was closed at 6:20 p.m. on January 10 after the retaining wall of a key bridge collapsed suddenly near Kela Morh, Ramban.While repair work was started by authorities, Border Road Organization launched Bailey bridge construction in the nearby area to restore the traffic on the highway.

“The Load capacity is 40 tons including the weight of the vehicle. People have to be very very careful. Overloaded trucks or vehicles carrying more than 40 tons of weights will endanger this bridge,” Engineer BRO, Brigadier IK Jaggi, told reporters after the trial run was carried this afternoon, as per GNS correspondent.

To a question when the light motor vehicles and the heavyweight vehicles will be allowed, the officer said. “our finishing is going on. We are carrying the final checking. Hopefully by 6 p.m. or 7 p.m., traffic should be traveling on it.”
He further said: “While our boys are working and we cannot have vehicles moving at the same time which will endanger my boys.”

Asked about the challenges, he said there were various constraints including weather, space, and getting material. “Too many people are coming to see something is happening. There was no space to work. But then we face these challenges and move on,” he said, adding, “One of the challenges initially was to get source together and we had to manage it from four to five different locations as far as Bhederwah etc.”

Meanwhile, sources told GNS that work to repair the retaining wall of the key bridge was going on and may still take around a week to complete. (GNS)