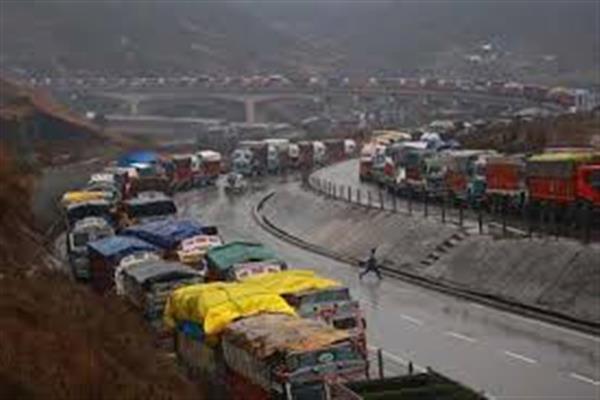 Srinagar, Jan 08: After remaining closed for five days Srinagar-Jammu National Highway, the only road link between Kashmir and rest of the country opened on Friday for stranded vehicles including those laden with essential supplies.

The 270 Km road was closed for vehicular movement due to the heavy snowfall, landslides, and shooting stones at several places.

Flight operations continued smoothly at Srinagar Airport on second day after remaining closed for four days due to heavy snowfall in the valley.

An official said that they have only allowed the essential supplies vehicles towards valley which were stranded at Udhampur sector that include petroleum products.

He said that no other commercial or passenger vehicle was allowed to ply on the Srinagar-Jammu National Highway today.

Divisional Commissioner Kashmir P.K Pole (IAS), while speaking KNO said that the essential supply vehicles which include petroleum and Gas were allowed to move towards the valley, however the road is closed for general vehicle movement.

“The decision on re-opening the highway for fresh traffic will be taken once all the stranded vehicles are cleared and the condition of the road will be assessed as the road has become slippery at several places due to snowfall,” he added.

He said that in view of good weather today flight operations were smooth at Srinagar Airport and there were 29 flight movements today.

Meanwhile, Mughal Road, the alternative route which connects the Valley with Jammu division through Shopian and Rajouri, continued to remain closed for the traffic due to heavy snowfall.

Kashmir is currently under the grip of ‘Chillai-Kalan’ the 40-day harsh winter period and has higher chances of snowfall during this period, which often leads to the disruption in air and surface connectivity between the valley and rest of the country.

In a communiqué by Traffic Police Headquarters J&K which read, “Subject to fair weather and better road condition, only stranded vehicles between Udhampur and Banihal shall be allowed towards Srinagar on Saturday.”

Meanwhile, the Srinagar MET department said weather condition has improved across the Valley and it is likely to remain dry till January 14—(KNO)