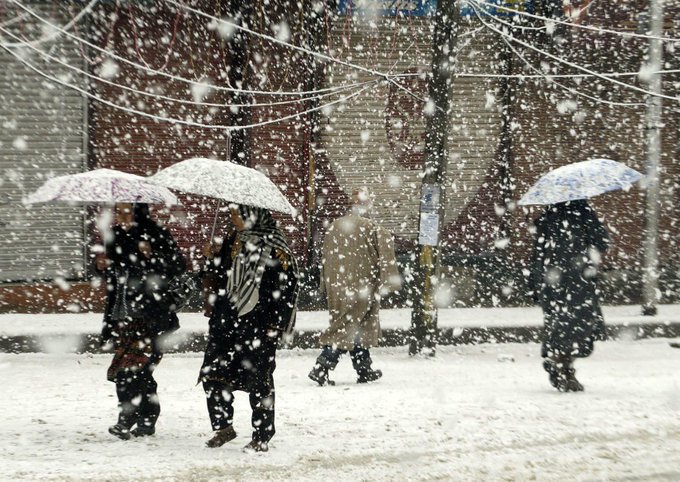 Srinagar, Jan 4: The major snowfall of the season left the entire Kashmir blanketed in varying depths of the white stuff even as air traffic remained suspended while Jammu-Srinagar and Mughal road remained closed.

Snowfall began early on Sunday morning in most parts of Kashmir and continued throughout the night with large swathes of south Kashmir receiving more snowfall than north and central parts of the Valley, the officials said.

Srinagar, the summer capital of the J&K, received snowfall of 13.4cms in the last 24 hours till 0830 hours, a MeT official said.

He said Qazigund, the gateway town of Valley, recorded the highest snowfall of 52cms while Pahalgam, the famous tourist destination, and Kokernag recording 21cms and 32cms respectively.

Regarding Gulmarg, the official said that the world famous skiing resort accumulated 4cms of fresh snowfall in the last 24 hours while Kupwara recorded 3.5cms of snowfall. Central Kashmir’s Ganderbal district received almost the same snow depth as Srinagar even as it’s higher reaches accumulated around 20-24cms of fresh snow.

Most interior lanes are clogged with snow even as the divisional administration pressed men and machinery into service in the early hours of the day to clear snow from the roads. So far reports said that the snow has been cleared from the most important roads even as work is in progress to clear the other roads.

Officials said that all flights at Srinagar airport have been deferred till 11:30 a.m. due to low visibility. No flight could take off or arrive at the airport yesterday, they said. “All flights scheduled today from Srinagar have been delayed or rescheduled due to bad weather,” the official said.
They said that the Jammu-Srinagar highway, Srinagar-Leh Highway and Mughal road, connecting Shopian and Poonch districts also remained closed due to the snowfall.