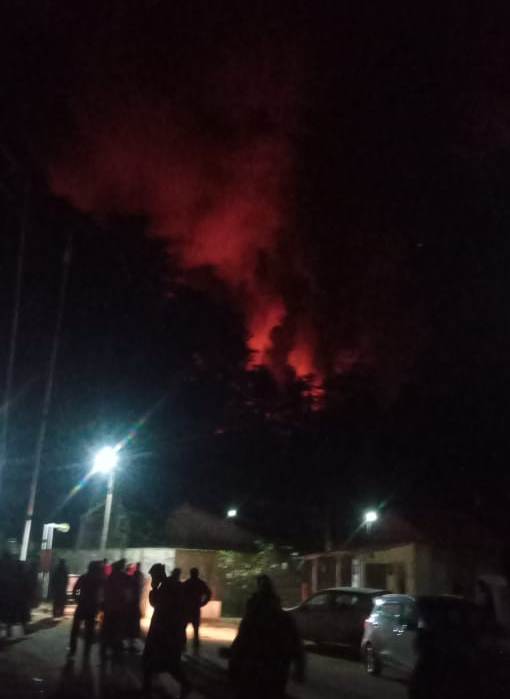 Srinagar, Dec 17: A two-storeyed wooden shopping complex, designated as ‘CSD’, was reduced to ashes in an overnight fire incident at an Army Infantry Brigade Camp at Lawoosa, falling under Nowgam Sector, in Mawar Langate area of north-Kashmir’s Handwara.

An official told GNS that the fire broke out around 2300 Hours last night inside Army’s 17 Infantry Brigade Camp premises which later spread to adjoining area.

After hectic efforts by fire department and civilians accompanied by personnel inside the Camp, the fire was brought under control at around 3 AM, the official said.

In the incident however, as per the official, a two-storeyed wooden complex designated as ‘CSD’ (Canteen) with at least twenty-four shops dealing in different items was completely damaged.

The fire also caused substantial damage to four other buildings including a TSI building, Training centre besides an HDFC ATM, Army Post Office (APO) and an Engineering Store, the official said adding “Luckily enough that the oil depot was somehow saved which otherwise could have led to a major catastrophe.”

Damage in tune of around four crores rupees is being estimated as per the preliminary assessment, the official said.

Regarding cause of the fire, the official said:”It would be too early to comment as what actually caused it.”

Meanwhile, there loud bangs which terrified the locals. It has been learnt that it was a result of explosion in inverter batteries and gas cylinders.

A police official in the meantime told GNS that they are assessing the situation and further details will be shared accordingly. (GNS)