Leaders of Gupkar Alliance were found involved in the big scams like Roshni and others: BJP leader 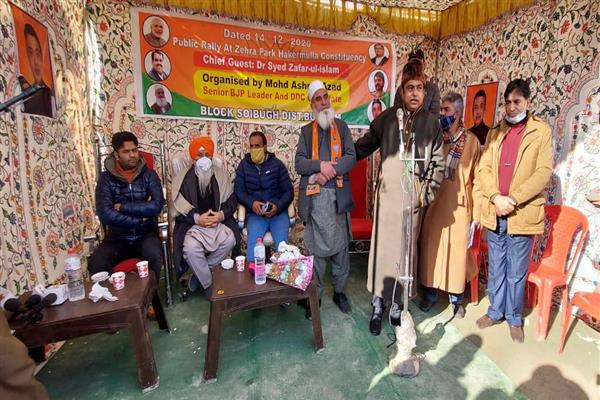 Budgam, Dec 14 : The wave of change has been witnessed across the country and people have realized that the future and welfare of young generation lies in strengthening Bharatiya Janata Party (BJP) and contributing in nation building under Prime Minister Narendra Modi, party’s National Spokesperson Dr Syed Zafar ul Islam said on Monday.

Addressing public gathering at Hakarmualla, Budgam, Zafar ul Islam as per a statement issued to the news agency—Kashmir News Observer (KNO) said that the BJP is contesting the DDC elections only for the development of Jammu and Kashmir; however, the regional parties here are busy in manipulating the common masses.

People yesterday voted for development and all the leaders of Gupkar Alliance by far were found negative for development rather they’re found involved in the big scams like Roshni and others, he said, adding that “our party has a clear agenda of development and prosperity. We are not looters and have not deceived people like regional parties.”

Former MLC and senior BJP leader Charan Jeet Singh Khalsa said that the time of the dynasty politics and the dynasty rule has ended in J&K and that the region will feel the difference soon. The people of Kashmir will see a visible change in the coming years and the party will reach every corner of Jammu and Kashmir,” he said.

In-charge Media & Information Technology Department Kashmir, Manzoor Bhat said that Quality healthcare, better roads, educational infra is our top priority. He appealed to the people to “vote for the BJP and negate these opportunist political fringe groups to teach them a lifetime lesson—(KNO)