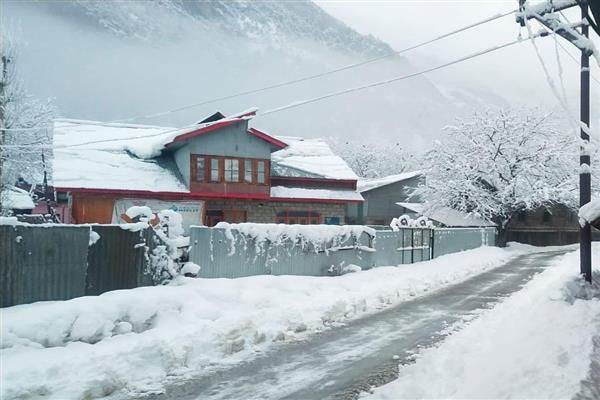 Srinagar, Dec 12: Srinagar, the summer capital of Jammu and Kashmir and its adjacent districts received season’s first snowfall on Saturday while the weatherman here has predicted dry weather conditions till December 19.

The higher reaches as well as the plains in the Valley and Leh received fresh snowfall in the intervening night of Friday-Saturday, bringing the temperature further down here.

The fresh snowfall has brought chill across Jammu and Kashmir as the maximum temperature goes further down in the Valley, MeT spokesman said.

He said the higher reaches including world famous ski-resort Gulmarg, Sonamarg and other places received fresh snowfall today as well.

Notably, the snowfall in the Valley has inundated the roads in Old City areas, thus causing hardships to the pedestrians in the interiors of Srinagar.

Meanwhile, the Srinagar-Jammu highway reopened today for the vehicular movement. The only road connecting the Valley with the rest of the States was closed for vehicular movement on Friday for maintenance purposes.

The traffic on the Srinagar-Jammu highway was suspended for some time following which it was thrown open for the vehicular movement, officials said.

Officials told KNO some link roads in Poonch and Rajouri district were also closed by the authorities after the slippery condition of the roads triggered by the fresh snowfall.

The Gurez-Bandipora road also remained closed for the vehicular movement..