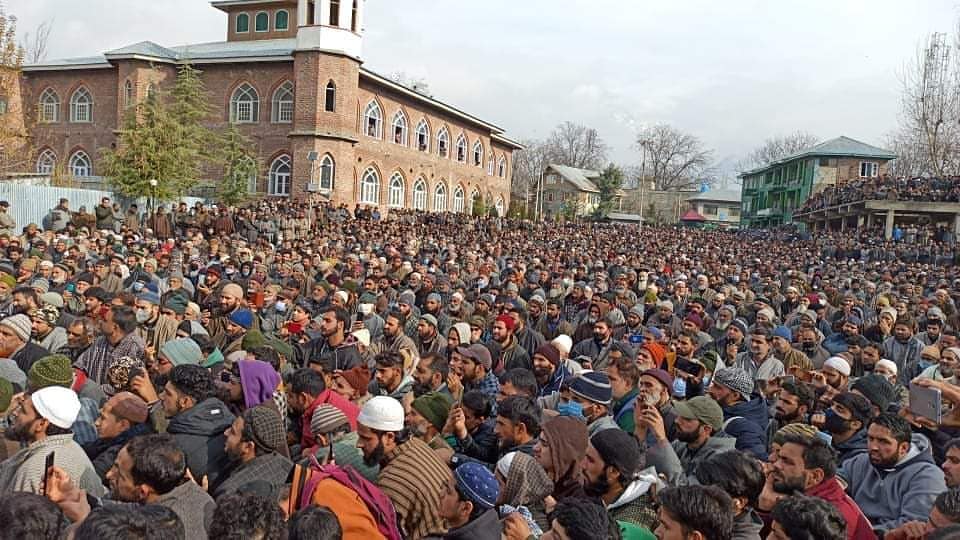 Thousands of people attended the funeral prayers of Maulana Noor Ahmad Trali held in the premises of Madrasa Taleeem-ul-Islam in Tral.

Before the funeral prayers, Maulana Rehmatullah Qasmi highlighted the contribution of departed soul in the field of religion and education and termed him a noble soul who always worked for the upliftment of society and who had taken the pledge to spread the light of education.

Maulana Noor Ahmad Trali had dedicated his entire life to serve the cause of justice. He was one of the few religious scholars in addition to being a great inspiration for social and educational development and philanthropy.

Maulana Noor Ahmad Trali was the patron of many religious schools and Darul Alooms. He was running a seminary called Madrasa Taleem-ul-Islam, Daraul Aloom Noor-ul-Islam and Oriental College.

The seminary Madrasa Taleem-ul-Islam in Tral was founded by his father in 1942.

They prayed to Allah Almighty to rest his soul in eternal peace and give courage to the bereaved family to bear this loss with patience.

Jammu and Kashmir Mutahida Majlis-e-Ulema (MMU), headed by the incarcerated Mirwaiz Dr Moulvi Muhammad Umar Farooq who continues to be under house arrest for the last one-and-a-half years, has expressed deep grief and sorrow over the demise of one of its leaders and renowned religious scholar, Moulana Noor Ahmad Trali. The MMU paid rich tribute to the deceased for his religious, educational and social reform services in Tral and its adjacent areas.

Noor Ahmad Trali was not only an experienced and ideological scholar but also among the founding members of the Mutahida Majlis-e-Ulema, the MMU said in a statement.

The deceased used to participate in meeting of the MMU and has many a times offered his valuable suggestions regarding the issues concerning the nation and millat, the statement said.

The MMU Chairman Mirwaiz Dr Moulvi Muhammd Umar Farooq while paying rich tribute to Moulana Noor Ahmad Trai termed his demise as a religious and educational loss. The Mirwaiz hailed the deceased for his unflinching and selfless services in Tral which include the establishment of Dar-ul-Uloom and Dar-ul-Banaat and consequently spreading of mission through these institutions.

The Majlis-e-Ulema, on behalf of all its members, expressed condolence and solidarity with the bereaved family of Moulana Noor Ahmad Trali, and prayed for highest standards in Janmah for the deceased. (KNT)