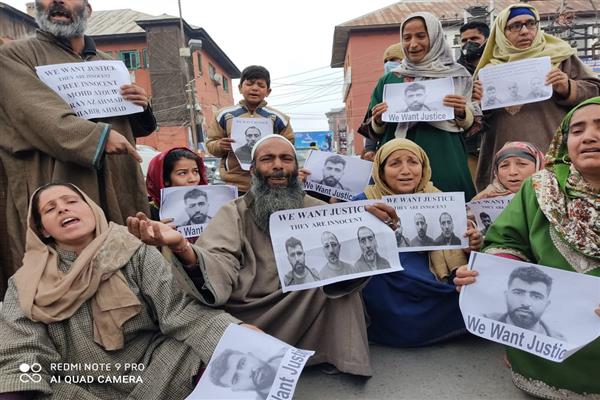 Srinagar, Dec 11): Families of three Kashmiri’s detained by Delhi police’s Special Cell last week, on Friday staged protest and appealed authorities of UT and New Delhi to ensure their early release. They said the trio have no militancy links and have never indulged in anti-national activities.

The families staged a protest here in Srinagar’s Press Enclave, demanding release of their loved ones who have been arrested by the Special Cell of Delhi Police last week.

Five persons, three from Kashmir and two from Punjab were arrested by the Special Cell of Delhi Police from Shakarpur area of Delhi. Delhi Police had claimed the arrests were made after a brief shootout in the area.

The family members of Reyaz Ahmed Rather and Shabir Ahmed Gojri, both residents of Nasrullah Pora and Muhammad Ayoub Pathan of Gondhipora village appealed authorities of UT and New Delhi to intervene into the matter and ensure that innocents not to be booked for that which they never commit.

“Has venturing of Kashmiri’s to New Delhi become a crime?”, they questioned and said arrestees have never been involved in anti-national activities. They added it was seen in past that Kashmiri’s were falsely implicated under fake charges and so is today.

The family members, mostly women told reporters that the men are innocent and have nothing to do with militancy and asserted that Delhi Police is speaking lies over their illegal detention.

“They visited Delhi to purchase few items at cheaper rates, but who knew fate has something else in store for them”, a woman family member told. She added that Delhi Police should check their credentials as their is nothing adverse registered against them here.