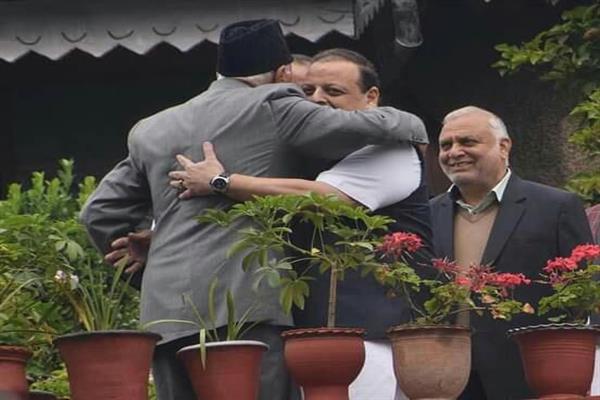 Jammu, Nov 18 National Conference (NC) Provincial President Jammu Devender Singh Rana on Wednesday said the coalition of J&K based political parties under Peoples Alliance for Gupkar Declaration (PAGD) has frustrated BJP from top to bottom, saying the scare prevailing in saffron party ahead of DDC elections can be gauged with the statements of New Delhi which termed the alliance “anti-national” and “unholy global gathbandhan”.

Talking to reporters in Jammu, NC leader Rana asserted that the formation of PAGD has become an “eye-soar” for New Delhi as alliance has put its hand on BJP’s sore vein.

“Statements are coming from New Delhi which terming the alliance as anti-national, unholy global gathbandhan etc etc speaks volumes. They are frustrated and are issuing threats now to overpower PAGD”, Rana said.

He was referring to latest tweets of Union Home Minister Amit Shah who on Tuesday hit out at PAGD, saying the alliance want foreign forces to intervene into Jammu & Kashmir and want to take back region to the era of terror and turmoil. Shah in his tweets said India will no longer tolerate an unholy ‘global gathbandhan’ against our national interest.

While hitting hard to BJP, the NC leader Rana said “Mehbooba led PDP is part of PAGD who was in coalition with BJP for three year in J&K. That moment the saffron party was praising PDP’s political acumen. Even when Mehbooba Ji delayed in joining hands with BJP, the saffron party came to her door with a begging bowl for Government formation. If she was then nationalistic and patriotic, how she became today anti-national?”.

When asked about BJP UT chief Ravinder Raina’s remarks that Dr Farooq and Mehbooba Mufti shall have to chant “Jai Shri Ram” in future, the NC leader said that NC needs no certificate of nationalism from them.

“History is witness when tribal mobs attacked J&K in 1947 there were leaders and activists of National Conference who gave tough fight to those came across the Line of Control. It was Late Sheikh Mohammad Abdullah who chosen to remain with Pandit Jawahar Lal Nehru’s secular India”, he said.

Rana added, “It was Dr Farooq Abdullah who was brought to Geneva by Late Atal Bihari Vajpayee and allowed him to deliver speech there. Even he chanted Jai Ram multiple occasions but unfortunately today BJP is portraying him as anti-national”.

The NC leader lashed out at New Delhi over labeling PAGD as “anti-national”, saying as PAGD decided to participate in DDC elections, threatening statements have started to come up from New Delhi which vindicates BJP’s frustration.

“They are afraid of PAGD. Earlier they criticized our stand when we were silent and now when the alliance decided to take part in elections, they got furious and are naming us anti-nationals, gang, etc etc”, Rana said.

He said BJP should answer to people of Jammu what they did during last five years with them instead of diverting attention from real issues.

“What BJP did in five years? Have they resolved the issue of employment? Have they ensured development at grass root level in Jammu? Have they fulfilled promises made with the people of Jammu? BJP should not run way from faults it committed in Jammu. They have to answer sooner or later”, the NC leader said.

He appealed all Jammu based political parties to unite at this juncture for the larger benefit of Jammu and keep divisive forces away from the region.

“The contentious issues between political parties in Jammu need to be shelved at this moment. We should work for the united cause of Jammu in order to restore and protect our rights snatched by BJP”, he said.

Terming BJP UT Chief Ravinder Raina a “funny” man, the NC leader challenged him to come forward and debate over the books of Hindu religion.

“No doubt he is my friend. But I don’t think it appropriate to reply his illogical talk”, Rana said.

“I am a proud Hindu. I love Hindus, Muslims, Sikhs, Christians and want to bring all communities along for ensuring peace and development in J&K”, he said. (KNS)