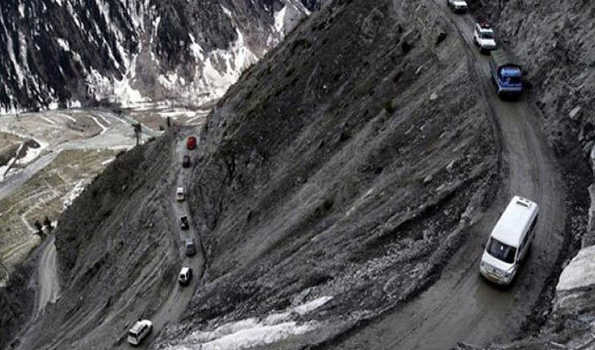 Ganderbal, Nov 14: The strategic 434-km Srinagar-Leh highway has been temporarily closed for vehicular traffic due to fresh spell of snowfall and slippery road conditions at Zojila Pass.

Due to fresh spell of snowfall, particularly at Meenmarg and Sonamarg, Zojila, Zero Point , traffic on the highway was temporarily suspended on Saturday No vehicle was allowed from both side, a police official said.

He said due to fresh snowfall and below freezing temperature, the road had become slippery. Therefore, he said, traffic was temporarily suspended as a precautionary measure to avoid any accident.

He said that no vehicle are stranded on any place at the highway we have cleared traffic yesterday from both sides ,Adding traffic has been temporarily closed for vehicular traffic due to fresh spell of  snowfall.