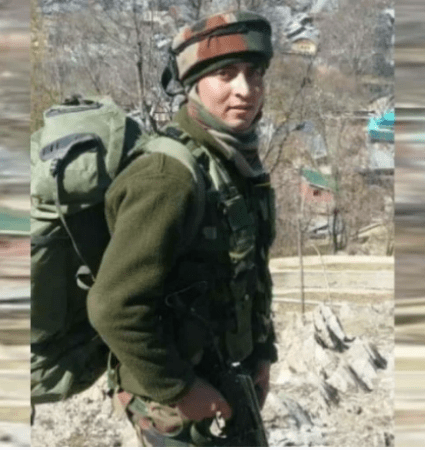 Srinagar, Nov 11: The family and relatives of an Army soldier who was allegedly kidnapped and killed staged a protest in Srinagar alleging authorities are showing no interest in locating the dead body of their beloved son.

Mystery still shrouds the disappearance of the Army soldier, Shakir Manzoor, even as an undated unverified audio had surfaced on social media in which a person, suspected to be a militant, claimed to have killed the abducted soldier Sharik and not returned the body.

Rifleman Shakir Manzoor (24), a resident of Rishipora village of South Kashmir’s Shopian district, was abducted on August 2 this year after he left his home. His car was later found torched in the neighbouring Kulgam district. His family found his torn clothes with bloodstains at three places in an orchard near his home.

The protesting family members who assembled here in Press Enclave Srinagar said that since August they are trying hard to locate the body of Sharik Manzoor.

His father Manzoor Ahmed said that: “From past three months we have been approaching everyone but nobody has helped us in retrieving the body. If he has been killed, then please help us to locate his body and if he is alive, then too please help us in locating him,” he said.

Manzoor Ahmed said that nobody came forward to help the family. “We demand that this case should be handed over to Central Bureau of Investigation (CBI). Only CBI can unearth the truth,” he said. (KNT)