Under no circumstances Article 35-A will be restored in JK, says BJP National Gen Sec 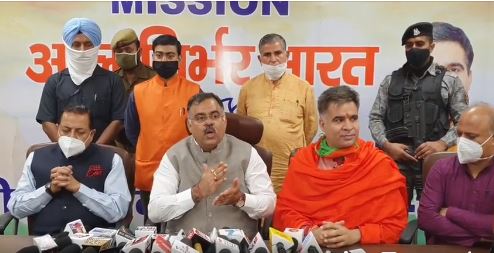 Jammu, Nov 07: Bhartiya Janta Party (BJP) National General Secretary Tarun Chug Saturday termed the People’s Alliance for Gupkar declaration as a group of “day dreamers” stating that under no circumstances Article 35-A will be restored in Jammu and Kashmir.

Addressing a press conference in Jammu, Chug said that BJP is going to contest District Development Council (DDC) polls on all the constituencies that too with its own party symbol.

While replying to a question over Peoples Alliance, Chug termed it as a day dreamer’s group adding that leaders of declaration are exploiting people of Jammu and Kashmir through bundle of lies. “There is no chance of restoration of Article 35-A in Jammu and Kashmir.” Chug said.

When asked about rehabilitation policy for militants, BJPs National General Secretary said that “we will not talk to anybody holding gun and those holding guns have only one place and that is grave.”

He further said that a long plan for development of Jammu and Kashmir is in offing and government is working on it.

While replying to a question regarding some remarks by National Conference leaders, Chug said that BJP is ready to hold a debate with Dr Farooq Abdullah on the issue of Jammu and Kashmir at any place and time in Kashmir.

“We will talk on two issues only and that include wrongdoings of Abdullah’s in Kashmir and efforts made by BJP for development of Jammu and Kashmir,” he added. He was accompanied by MoS in PMO, Dr. Jitendra Singh and BJPs J&K President Ravinder Raina.

Member Parliament from Kathua Doda parliamentary segment and MoS in PMO, Dr. Jitendra Singh while sharing his views on the PAGD said that MPs of both National Conference and People’s Democratic Party were present inside both the houses when decision was made but they didn’t resign then

” Their MPs should resign publically for decision of GoI taken on August 5, 2019,” he said.

MoS further said that Home Minister of India has already issued multiple statements regarding restoration of statehood in Jammu and Kashmir. “I just want to add that statehood of Jammu and Kashmir shall be restored at appropriate time,” he said..

Hitting hard over regional parties in Jammu and Kashmir, Dr. Singh said that the leaders of these parties resorted to large scale wrongdoings in terms of appointments of daily wagers for which various schemes were launched from time to time in Jammu and Kashmir and youth was befooled.

Replying to a question over new land law, Dr. Singh said that whosoever uses word that Jammu and Kashmir is on sale should learn that sale of Jammu and Kashmir shall start with the sale of posh bungalows in Gupkar. “No law allows you to capture bungalows at Gupkar illegally,” Singh said—(KNO)