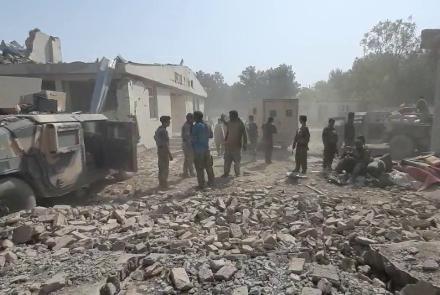 A roadside bomb blast that hit a passenger bus in Gereshk district, Helmand province, on Saturday morning, left five civilians dead and nine others wounded, the Defense Ministry said in a statement.

The mine was planted by the Taliban, the Defense Ministry said.

According to TOLO news’ Abdullah Hamim, the 601 Highway in Helmand that connects Lashkargah city with the Kandahar-Herat highway is also closed to traffic over the last two days due to damaged roads and bridges. The roads, security officials said, have been damaged by the Taliban.

Shirzai said that women and children are also among those wounded in the blast.

Jailani Farhad, spokesman for Herat governor, said the mine was planted by the Taliban.

Taliban has not commented on the two incidents.

A rise in violence in the country comes amidst the ongoing peace negotiations in Doha. President Ghani in his speech at a research institute in Doha last week called for an agreement on immediate reduction in violence. A similar call was made by US special envoy Zalmay Khalilzad in his visit to Islamabad late last week.