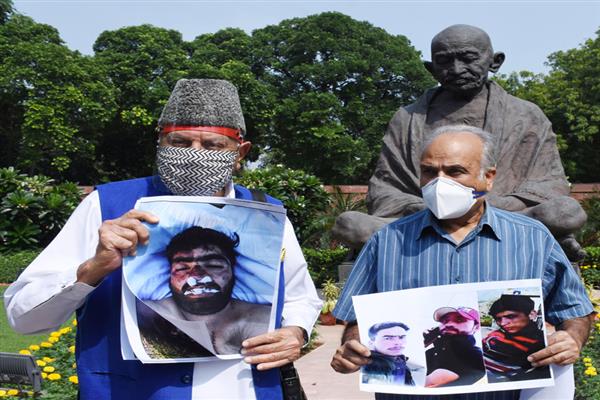 New Delhi, September 20: Jammu and Kashmir National Conference president and MP Srinagar Dr. Farooq Abdullah protests in front of Gandhi statue at the foreground of the Parliament house along with MP Anantnag Hasnain  Masoodi against fake encounters and custodial killings in Kashmir.
According to statement, both Dr. Farooq, Masoodi held placards depicting the pictures of the slain men who were killed in the Shopian fake encounter and alleged Sopore custodial killing.
They said that the magisterial inquiries announced by J&K government into the circumstances leading to the killing of Irfan Ahmed Dar of Sopore and Kaunsar Reyaz of Batamaloo is mere eyewash and demanded a thorough probe into the killings to establish the facts. The protesting MPs demanded filling of cases into the incidents as per the law of the land.
The Party has expressed outrage against the fake encounter and custodial killings in Kashmir and raised the issue inside and outside the parliament. The Party has unequivocally asserted that such incidents would not help the situation to improve and bridge the widening gap of mistrust between the government and the people.
Party MPs headed by Party President Dr. Farooq Abdullah had also called on the Speaker of the Lok Sabha and urged him to allow discussion on J&K in the Parliament.The party MPs also moved calling attention motion in the Lok Sabha urging the Defense ministry to update the house on the status of the inquiry into the Shopian fake encounter. Party MPs also moved adjournment motion against the incidents besides raising the issue during the zero hour of the parliamentary proceedings.