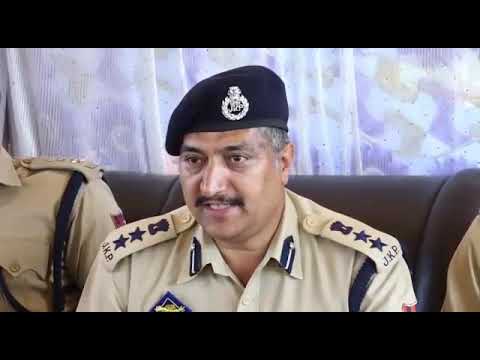 Addressing a press conference at District Police Office (DPO) Srinagar, Senior Superintendent of Police (SSP) Srinagar Dr Haseeb Mughal said that on July 4, a complaint was received by the police station Nowhatta, Srinagar about theft in a mobile shot. “The thieves had cut the shutter of the shop in the dead of the night and stole mobile phones worth lakhs,” the Srinagar police chief said.

He said when investigations was taken up, CCTV footage was obtained but no clue was found. “After almost two months of investigations, we found no clue other than the one that rag pickers were roaming in the area. This was the only clue,” said SSP Srinagar Dr Mughal.

He said that after analyzing towers and other electronic surveillance, one of the stolen mobile phones was put on in New Delhi. “Simultaneously, a police team from north zone (Srinagar) was sent to Delhi and they arrested one person Abdur Razak from JJ Coloney Bhawna and from his possession 112 stolen mobiles were recovered.

“Razak was shifted to Srinagar and after questioning him, he named two more persons who are also from Delhi but were working in Anantnag district as labourers. The three were acting as rag pickers, and had done recee in Nowhatta. They were waiting for the arrival of consignments of mobiles and then steal from the same shop,” the SSP Srinagar said.

He said in the arrest of three accused, Delhi police also helped. “The arrest of two persons from Anantnag who are also Delhi residents led to recovery of 11 stolen mobiles,” Dr Mughal said.

He said that in total Rs 25 lakh worth mobiles were recovered and three persons, all from Delhi were arrested. “The investigation is on and more arrests are likely to be made,” the SSP said, adding that traders should take precautions while receiving consignments and watch out for a suspect in the vicinity—(KNO)