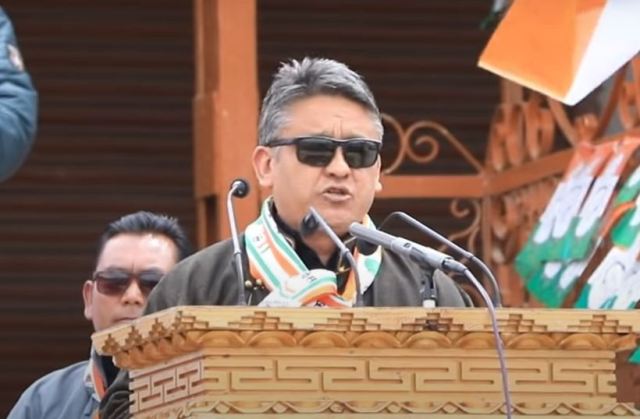 Srinagar, Sep 02: The former Member of Legislative Assembly (MLA) from Ladakh, Deldan Namgyal Wednesday said that the redrawing political map of Jammu and Kashmir and Ladakh post the abrogation of Article 370 and 35-A provoked China to intensify its incursion.

Former legislator from Ladakh and senior political leader Deldan Namgyal blamed the NDA government for its failure and policies in Jammu and Kashmir and said that the redrawn political map of the erstwhile State provoked China more and it is hiding the actual details of alarming situation that has emerged in the eastern Ladakh after the intensified incursion.

He said that the government must let the entire nation know about the actual situation and stand-off between China and India in eastern Ladakh.

“The central government lied to the nation and Prime Minister of India Narendra Modi in particular. PM recently said that no one has encroached on our land nor anything similar will be allowed to happen, which is a total lie”, he said.

He said that the China’s Army has moved to finger 5 and are deployed in the entire Galwan Valley and if they (PLA) encroach the finger 4 then Leh City will be only 80 kilometers away from China’s incursion in eastern Ladakh.

“The recent stand-off between the China’s PLA and Indian Army is very threatening and the situation is very serious in the area”, he said.

“The government must pacify it and try to resolve the matter under diplomatic channels. Amid the threat of global pandemic, China’s move is mounting; the pressure among local populace and government must come out clearly before the nation with facts that the situation in eastern Ladakh is highly alarming.”

The former legislature said that amid the highly alarming situation in eastern Ladakh, the government has snapped telecom services (BSNL) in the areas close to Line of Actual Control (LAC) for the last two days and no one is allowed to go there.

“China has adopted a policy to encroach in huge amount rather what used to happen in past and government must accept that the incursion has happened in huge numbers and now we (Indian Territory) are only left with finger 1, 2 and 3 and have lost 4,5,6,7 and finger 8 to China this time.”

“China’s PLA is dominating the highest altitude at the spot and Indian Army is downwards (Declined). In case anything unfortunate happens, the rate of casualties to Indian side will be higher,” he predicted.

Expressing concern about the safety of territory and its people, he said that if there is no solution before the forthcoming harsh winters, the situation will have drastic impact over the entire region since the incursion has already happened and PLA is only 80 kilometers away from the Leh City.

“I am not sure whether we are ready or not but we need to take it very seriously and it must be solved with dialogue,” he said.

The former legislature also said that post 2019, China has intensified its style of incursion more over the redrawn political map of Jammu and Kashmir and Ladakh after the abrogation of Article 370 and 35-A provoked China more.

Blaming the Bharatiya Janata Party (BJP) led Central government, he said that the center has miserably failed to keep good diplomatic ties with China and the incursion is happening in huge amounts to a level that has not happened in the past.

Former member parliament, Hassan Khan told KNO that no matter the entire region remains cutoff from the rest of country for around 6 months during winters, but the Army is also well prepared and people are very calm and composed since there are no apprehensions due to the LAC being a far-off place away from Leh.

He said that if the situation leads to a war, the entire country will come under it. “The border with China has not been demarcated so far over the years that’s why the encroachment keeps happening and leads to such an amount of confusion,” he said.

“It’s for the very first time that such a serious situation has come up in eastern Ladakh post the 1962 war and Army deployment is being made more on roads but there is no impact of it on local population as of now, the former parliamentarian said—(KNO)