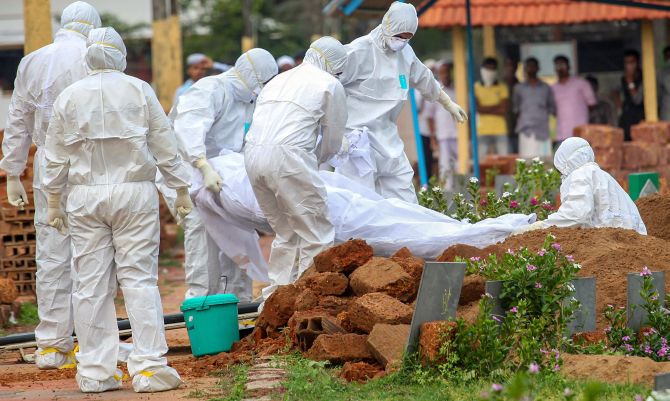 Srinagar, Aug 30: Seven persons died due to covid-19 in last 24 hours in Jammu and Kashmir, taking the fatality count to 697.

Official sources said that among the victims, three were residents of Jammu district while two others were from Srinagar and one each from Ganderbal and Bandipora district respectively.

A 70-year-old woman from Nadihal Bandipora died at SKIMS Bemina, 13 days after she was admitted to the one of the exclusive facilities for the management of the covid-19 patients here.

A 40-year-old man of Bemina who was admitted to a hospital here on August 26 and diagnosed with bilateral community acquired pneumonia died today, they said
A 40-year-old man from Gousia Colony Bemina who was admitted SMHS hospital on August 26 as a case of bilateral community acquired pneumonia died this afternoon, they said.

A 47-year-old woman from Prem Nagar Jammu, who was admitted to GMC Jammu on August 28 and was diagnosed with “bilateral CAP, ARDS, DKA and Old Kocks”died at 8:30 hours, a doctor at GMC Jammu said.

Last night, two women—one of them a 55-year-old woman from Khour Pallanwalla and another a 46-year-old from Chack Arnia died at GMC hospital Jammu.

An officer of health department Ganderbal told GNS that a 56-year-old man from Shaikh Zoo Wakoora who was diagnosed with Bilateral CAP and hypertension died at a hospital in Srinagar.

A 57-year-old from Drass Kargil who was admitted to SKIMS Soura on August 26 died this evening.