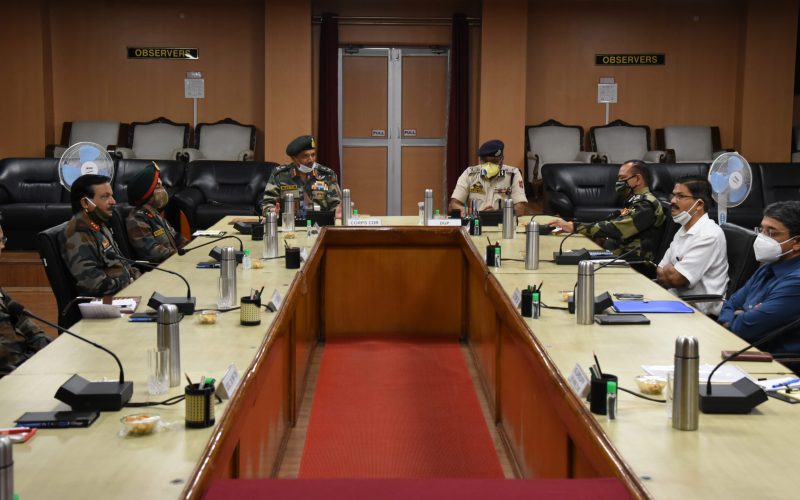 Srinagar, Aug 03: The top brass of military, intelligence agencies and civil administration have discussed anticipated security challenges for the upcoming anniversary of abrogation of article 370, militant recruitment, infiltration and COVID 19 in their core group meeting.

The General Officer Commanding (GOC), Chinar Corps, Lt Gen B.S. Raju, and Director General Police, Jammu and Kashmir, Dilbag Singh, co-chaired a meeting of the Core Group consisting of top officials of the civil administration, intelligence agencies and security forces here on Monday in the backdrop of the prevailing situation in Jammu and Kashmir.

The meeting was called to review the security situation in the UT and to ensure readiness to meet the anticipated security challenges.

The Core Group reviewed the security situation in Kashmir and the progress on handling the COVID challenges facing the Union Territory (UT).

Special emphasis was given to ensure extensive security for the upcoming one year anniversary of Abrogation of Article 370 including discussions on administrative measures, according to the press statement.

“On the LoC the recent increased infiltration attempts and CFVs (Ceasefire violations) were discussed. Defence officials shared that the surveillance grid and counter infiltration grid in sensitive areas has been reinforced, which has led to early detection and foiling of infiltration attempts in last few weeks. Reports indicate that the launch pads in PoK are full and Pakistan establishment is keen to push in infiltrators in next few weeks. The forces are ready for any border misadventure in form of BAT actions or actions to support infiltration,” the press statement said.

It also reads, the core group discussed the need for continued intelligence based anti-terror operations with a humane touch. To address the complete eco-system of terror organisations, the efforts to identify and arrest over ground workers who sustain the terror organisations will continue with vigour.

“Review of security indicators show that violence level has dropped in last one year. Intelligence inputs indicate desperation in Pakistani establishment and separatists to generate violence and civil casualties in the valley. The Security Forces have to be wary of attacks on political workers, attacks on soldiers on leave, IED attacks and attacks on isolated posts or patrols. Concurrently law and order including COVID restrictions need to be enforced for safety of the common man,”  it added.

The officials also discussed local recruitment which though lower than last year had seen a spurt in last few weeks, it was decided to enhance steps to prevent local youth from joining terror tanzeems.

“Steps would include proactive steps in consultation with families of vulnerable youth, and identification and arrest of instigators,” the statement said.

It further reads, The Divisional Commissioner brought out the efforts of the administration to meet the COVID challenges. He also informed the gathering of the efforts to speed up developmental activities in last few months which has resulted in completion of 14000 projects which were languishing for 3 to 5 Years.

Maximum projects approved under PMDP in 2015 have started.

“Agricultural and rural economic activity is seeing revival, however tourism industry has been impacted by the security challenge and COVID 19 in 2020. He shared that ‘back to villages’ program has started showing results with empowerment of local elected representatives,” the statement read.

Expressing happiness on the synchronization of actions amongst various intelligence agencies, the Corps Commander and DGP also lauded the coordination amongst different security agencies.

In the end, the senior commanders expressed satisfaction at the successful handling of the security situation and asked for continued efforts to maintain peace in Jammu and Kashmir.