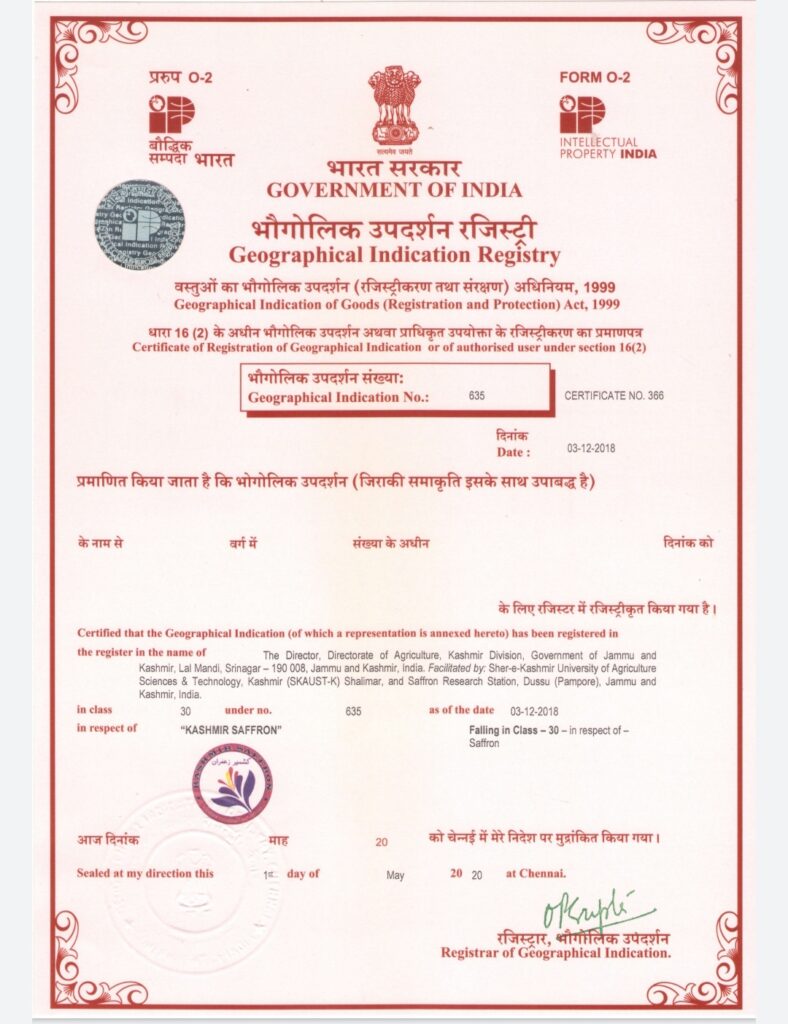 JAMMU, JULY 25: In a momentous decision GoI has issued certificate of GI registration for the Saffron grown in the Kashmir Valley.

Expressing happiness on the development, G. C. Murmu  Lieutenant Governor, Union Territory of J&K said that this is the first major step to put Saffron produced in the Kashmir Valley on the world map with authentication.  With the GI tag, Kashmir Saffron will acquire more prominence in the export market and would help the farmers get the best remunerative price.

Lieutenant Governor while complimenting the Director Agriculture Kashmir for pursuing GI certification said that restoring the pristine glory of Kashmir saffron is top priority for both the Govt. of UT of J&K as well as GoI.  He further said that with the completion and inauguration of State of Art Spice Park next month, these measures will prove to be the game changer for Kashmir Saffron.

Giving further details, Navin K. Choudhary, Principal Secretary to Government, Agricultural production Department said that GI certification establishes specific geographical origin and certifies certain unique qualities of the product.  GI certification enables those who have the right to use sign in order to prevent third party using the sign.  This GI certification would also stop the prevalent adulteration of Kashmir Saffron and thereby authenticated Saffron will fetch much better prices.

Choudhary further informed that Kashmir Safrron is the only one in the world grown at an altitude of 1600 meters, which adds to its uniqueness and differentiate it from other saffron varieties due to its unique characteristics like longer and thicker stigma, natural deep-red colour, high aroma, bitter flavor, chemical free processing and high quality colour strength, flavor and bitterness.

Choudhary further informed that on the directions of LG, Sprinkler Irrigation System in the entire saffron fields are being installed on a war footing and likely to be completed in next two weeks.  With the completion of Sprinkler Irrigation System and inauguration of State of Art Saffron Spice Park at Pampore, the population associated with Saffron will witness sea change from the production to marketing.  He also complimented Director Agriculture Kashmir, Shri Altaf Aijaz Andrabi for vigorously pursuing for this certification