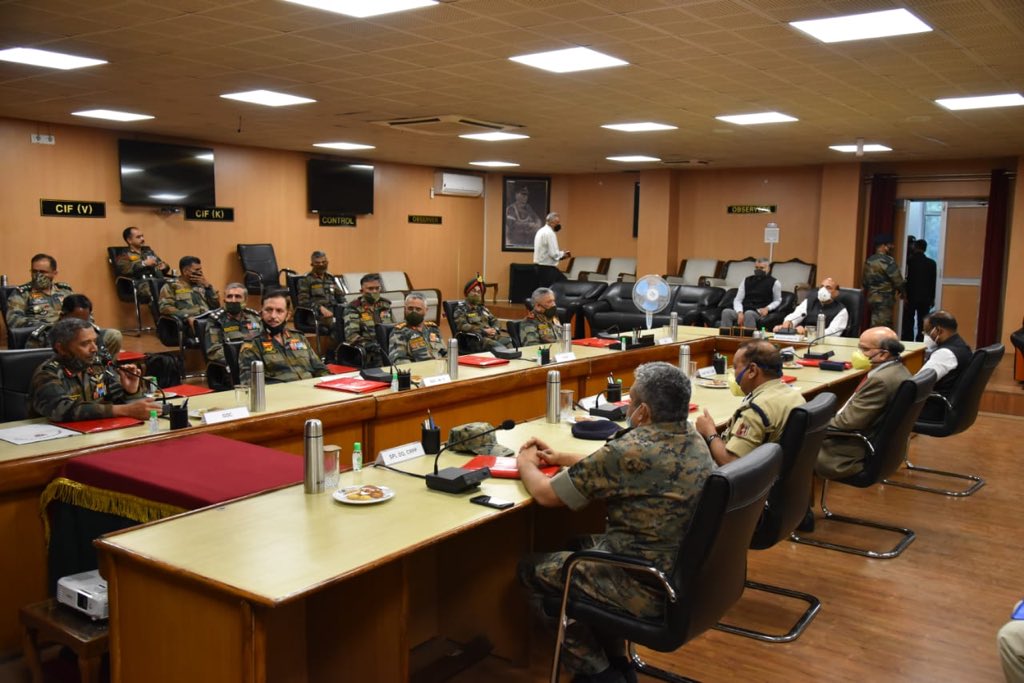 Srinagar, July 17: It is s high time to use all technical support to plug infiltration completely and to clean Kashmir from the remaining militants by continue to zero collateral damage mantra during anti-militancy operations, Defence Minister Rajnath Singh told top army, police and other officers from the security grid of Kashmir in a high level security review meeting in Srinagar.

A top security officer said that the Defence Minister hailed the efforts put in by the security agencies including army, police and the CRPF on the anti-militancy front and praised all the agencies for maintaining synergy and conducting clean operations against militants.

“The Defence Minister asked the security top brass to continue anti-militancy operations at the same pace and ensure all the remaining militants are killed and at the same time infiltration is plugged on all routes in J&K,” the officer revealed.

The official said the Defence Minister directed the troops to use all modern means including latest technical support to plug infiltration and ensure no militant manages to sneak in to “Indian territory.”

“He also asked the security officials to involve youth in developmental activities of the UT and provide a helping hand to the people in the challenging times of Covid-19,” the official said, adding that Singh also stressed on cleaning remaining militants from Kashmir soil and making the “region an abode of peace and tranquility for which it was known earlier.”

Earlier, at the army’s Srinagar-based 15 Corps headquarters, the Defence Minister was given a power-point presentation on the infiltration status and the progress made on the anti-militancy front. The 15 Corps commander Lt Gen B S Raju and DGP Dilbagh Singh briefed the Defence Minister on the prevailing security scenario in J&K, especially Kashmir. Sources privy to the meeting said that Singh was also apprised about the killing of top commanders of various outfits including Hizbul Muajhideen, Jaish-e-Muhammad and Lashkar-e-Toiba.

In a statement Defence Spokesman in Srinagar, Colonel Rajesh Kalia said that  the Defence Minister was briefed in detail about the situation on the Line of Control, in the hinterland and successful anti-militancy operations. “The Defence Minister stated that the country was proud of the valour and patriotic spirit of the soldiers.

He urged all to continue to work hard to ensure security both on the Line of Control and in the hinterland,” the defence spokesman said, adding that the Defence Minister also impressed upon the commanders to maintain strict vigil along the Line of Control and remain prepared to give a befitting reply to “any misadventure by the adversary.”—(KNO)