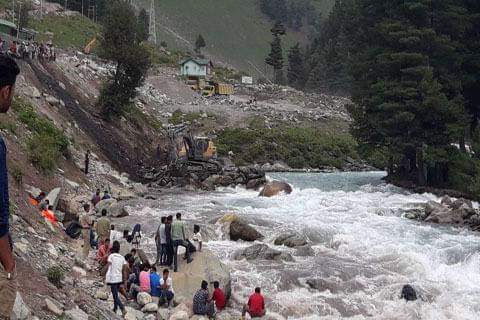 Srinagar, July 8: Body of a boy who drowned along with his friend while bathing in river Sindh in Central Kashmir’s Ganderbal district was retrieved after three days on Wednesday.

On Sunday last, two boys, Zahid Farooq Rather and Rashid Ahmad Khan, both residents of Palpora Noorbagh Srinagar, drowned in the water body near Kijpora Kangan.

The locals, police as well as SDRF team continued massive rescue operation which continued all these days except during the nights.

“The body was another boy (Rashid Ahmad Khan) was recovered from Nallah Sindh near Wayil Bridge,” SSP Ganderbal Khalil Poswal told GNS. On June 6, rescuers found body of Zahid Farooq Rather near Preng.

In the aftermath of the Sunday’s incident and as a part of precautionary measure, Deputy Commissioner Ganderbal has ordered a complete ban on swimming/bathing in Nallah Sindh and its tributaries the central Kashmir district. (GNS)