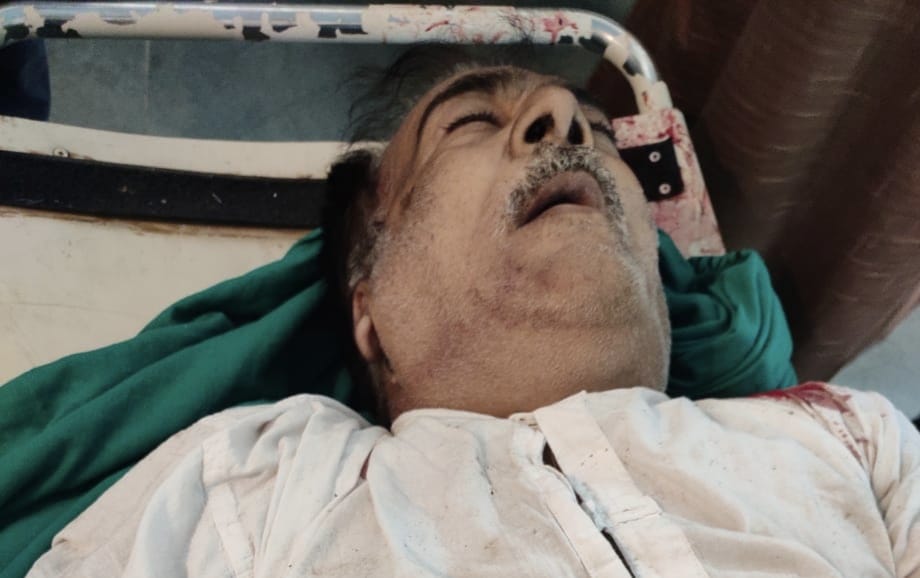 They alleged that Bashir Ahmed, a resident of Mustafa Abad HMT area of Srinagar was dragged out from the vehicle and shot at point blank range by Para-military troopers after militants attacked the CRPF party, the news agency added

Refuting the claims made by the CRPF, the family of slain civilian alleged that Bashir Ahmed was killed in cold blood.

“We received phone calls from Sopore who informed us that our father has been killed by troopers,” the son of the deceased was quoted by KNT news agency as saying.

While speaking to journalists at their home in HMT Srinagar, the son of the deceased civilian claimed that his father left home at 06:00 in the morning for Sopore, free press Kashmir reported.

But soon “after the attack, he was brought down from his vehicle and killed in front of his 3-year-old grandson”.

The deceased’s daughter told reporters that her mother was sick and he was also scheduled to bring her from Sopore to Srinagar, so that she can get better care.

She said once her father reached on the spot where the incident had taken place, he was dragged down from the vehicle and killed in a “cold blooded murder”.

Quoting eyewitnesses, the son said that little kid who was accompanying his grandfather was terrified after troopers shot him dead, Free Press Kashmir reported.

“My father was 65 year old and he had gone to Sopore for some work. He was a Contractor by profession and was accompanying his grandson,” he said.

CRPF Spokesperson in his version had told news agency Kashmir News Trust while divulging information about the shootout, said that today at around 07:30 hours Golf Company of 179 Battalion CRPF reached Model Town Chowk of North Kashmir’s Sopore for Naka/patrolling duties.

“As the troops were alighting from the vehicles to occupy their respective spots of deployment, militants hiding in the attic of a nearby mosque started firing indiscriminately on the troops, resulting in injuries to 4 CRPF personnel. These include Constable Bhoya Rajesh, Head Constable Deep Chand Verma, Constable Deepak Patil and Constable Nilesh Patil. Head Constable Deep Patil succumbed to his injuries while one civilian died on spot in the militant attack.”

After the family has alleged that he was brought down from the vehicle and killed, Sopore Police denied the allegations.

SSP Sopore Javid Iqbal said the civilian was killed in firing by the militants. “Police also rescued his 3-year-old grandson,” he said as quoted by Free Press Kashmir.

However, the police attributed the allegation as “news surfaced on some social networking sites”, not as an allegation of the family, and said action will be taken against “false reports”.

“The news surfaced on some social networking sites that the civilian was brought down and killed is totally baseless and is far beyond the facts. Sopore Police refutes and denies the news and legal action shall be initiated against the false reports and rumours,” the police said.