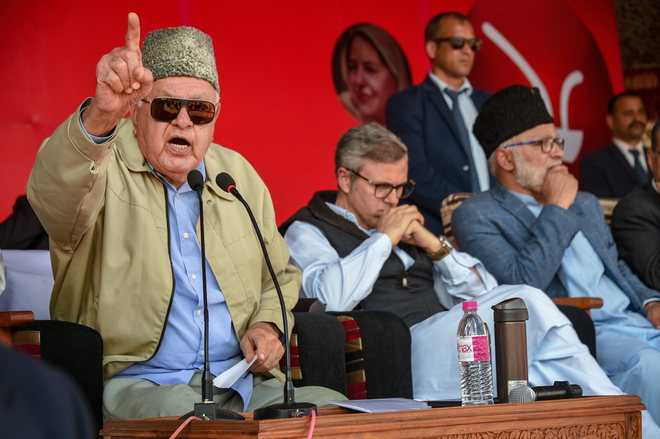 Srinagar, June 19: At a time India and Chinese troops are locked in a fierce confrontation in the heights of eastern ladakh, National Conference (NC) has called for immediate annulment of all the 5th August 2019 decisions and restoration of the 4th August 2019 constitutional position of Jammu and Kashmir.

NC welcomed the apparent shift in the ruling Bhartiya Janta P’s stand from belligerence to amity and peace, discernible from the recent statements of Rajnath Singh and Nitin Gadkari, two senior Ministers in the Union Cabinet.

The NC Members of Parliament Dr Farooq Abdullah, Mohammad Akbar Lone, Hasnain Masoodi and the senior party leaders Mohammad Shafi Uri, Mian Altaf Ahmad, Shammi Oberoi, Qamar Ali Akhoon, Devender Singh Rana, Khalid Najeeb Suharwardy, and Javaid Rana have in a joint statement welcomed the statement of Gadkari that “India is not interested in expansion in land either from Pakistan or China” and that “India only wanted peace and amity”.

The statement welcomed the bold admission made by the leader of the stature of Gadkari’s that while he and his colleagues want to make India strong but “ the strength does not come from expansion” and that they want “peace not violence” and to “work together.”

The NC statement also noted with satisfaction the change from a hostile and aggressive posture that would day in and day out call for armed adventure across Lines of Control, to a conciliatory posture advocated by Defense minister Rajnath Singh, in his Jan Samvad address to party cadres.

“It is stated that mere statements to create an atmosphere of “peace, love and amity” however are to have no meaning unless GOI respects the political aspirations of the people of Jammu and Kashmir,” the NC party statement added..

The statement further said the party underscores the need to restore special status of Jammu and Kashmir and the constitutional guarantees extended from time to time under binding covenants, unconstitutionally, arbitrarily and unilaterally taken away on 5th August 2019.

“The signatories to the statement have expressed deep anguish over skirmishes on LoC and LAC and the consequent loss of life and property. The civilian population in the border areas, it is pointed out, is under huge economic stress and the border skirmishes are to further compound its problems,” the NC statement said.

Recently 20 Indian soldiers including a colonel rank officer were killed during clashes with Chinese troops in Galwan valley while 76 sustained injuries.

The party stated that revocation of 5th August 2019 decisions and unconditional dialogue with all the stakeholders is pivotal to the lasting peace and prosperity in the region.

The party demanded immediate annulment of all the 5th August 2019 decisions and restoration of the 4th August 2019 constitutional position of Jammu and Kashmir.

“The statement also calls for opening of all traditional routes including Kargil- Skardu, Jammu- Sialkot, Poonch – Rawalakot, to allow free movement of people across LoC and LAC and to promote people to people contact and strengthen inter- regional trade and cultural links,”.