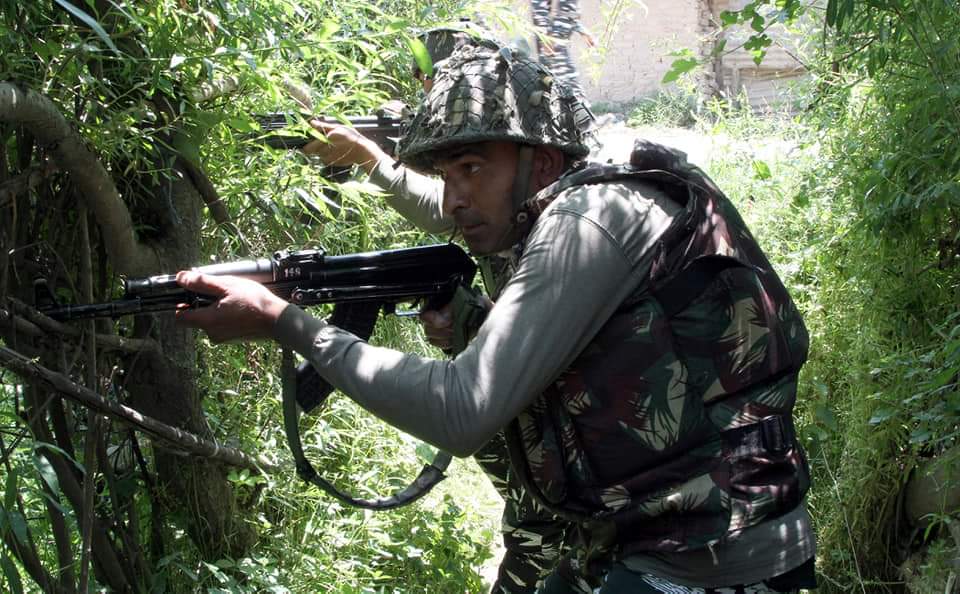 Shopian, June 10: Five militants were killed in an encounter that broke between militants and the government forces in Sugoo – Hendhama village of South Kashmir’s Shopian district on Wednesday.

Meanwhile, mobile internet service has been suspended in the area.

Defence Ministry spokesperson Colonel Rajesh Kalia said that Special Operation Group (SOG) of Jammu and Kashmir police, 44 Rashtriya Rifles (RR) and 178 battalion of CRPF launched a joint Cordon and Search Operation (CASO) at village Sugoo Handamah in Shopian following a tip off about the presence of militants at 0145 hrs on Wednesday.

However, he said when the troops were moving towards a particular area in the village, militants hiding there, opened fire with automatic weapons at 0530 hrs.

Col Kalia said forces retaliated, ensuing in an encounter, adding three militants were killed in the exchange of fire.

He said when forces were sanitizing the encounter site fresh firing exchange of fire took place during which two more militants were killed.

A police official said bodies of all five militants have been recovered. “The identification and affiliation of the killed militants is being ascertained,” he said.

However, he said as per credible information the killed militants belong to HM and Lashkar-e-Taiba (LeT). “One of them is District Commander of HM. Police and SFs conducted operation professionally and no collateral damage occurred,” he said.

He said incriminating material, including 2 AK rifles, one SLR and one pistol, were recovered from the site of encounter. “All the recovered materials have been taken into case records for further investigation and to probe their complicity in other crimes,” he said.

He said people are requested to cooperate with police till the area is completely sanitized and cleared of all the explosive materials, if any. “This was the third operation in the last three days.

As many as 14 militants, including top commander, have been killed in last three days,” he added.

Meanwhile, additional forces and police were deployed in the adjacent areas to prevent any demonstration.