“What happened after that I have no idea. I lost my all senses,” the broken father said

Peer Mehrajudin who was shot dead by CRPF at Kawoosa crossing

Budgam, May 14: Out rightly rejecting the claims of police and CRPF, Ghulam Hassan Shah, cop uncle of the slain Budgam youth, termed the killing of his nephew as a ‘cold blooded murder’

The Cop uncle was accompanying the deceased when he was shot dead by CRPF. The deceased was driving him to the Police Control Room (PCR) where Shah is posted.

Peer Mehrajudin, 24, was shot dead by the paramilitary CRPF near Kawoosa crossing located at the peripheries of summer capital Srinagar. He was a resident of Makhama village in central Kashmir’s Budgam district.

“It is a cold-blooded murder,” Shah told The Kashmir Press, adding, “It was committed by the forces’ deployed at the checkpoint in broad day light”.

Narrating the incident, Shah said that at around 10:15 am Thursday morning while he was travelling to PCR with his nephew in the car, a head constable of J&K police made gesture, asking them to keep their vehicle parked on roadside.

“After a brief questioning I showed them my identity card and requested him to let us go,” he said.

“Without further questioning, the cop told us to move”.

Shah said the police man at the checkpoint then raised his hand, apparently passing a signal to the CRPF trooper- who was keeping a vigil on the army convoy, standing few meteres away from them.

“We couldn’t understand what he conveyed to him,” he said.

“In the meantime CRPF trooper pointed his gun towards us and straightaway aimed and fired at my nephew’s shoulder while he was driving the car,” Shah said.

After taking a pause, he said, “Within seconds I saw his body was completely drenched in blood. The seat on which he sat, his clothes, body and hands, everything had turned red as blood sprouted out of his shoulder”.

While his nephew lied in pool blood, the cop uncle alighted his vehicle and angrily shouted at the CRPF trooper who opened fire.

“Tunai Qatal Kiya, Hamai Gadi do Ham isko Hospital lai jaye gai (You have murdered him, give us a vehicle, we will now take him to hospital)”. But remained silent,” Shah said.

“While I was shouting helplessly, the CRPF Major came and stopped a vehicle that was passing by and told him to drop us at the hospital”.

Later, he said, they took him to the nearby hospital at Narbal following which he was shifted to the SMHS Hospital Srinagar.

“Till then his blood had drained out completely and he lost his battle with injuries,” Shah said.

While strongly rejecting the claims made by police and CRPF that their car jumped at two checkpoints, he said it was a baseless and a blatant lie.

“This justification is put forth to cover-up the crime committed by police and CRPF,” Shah said.

“Their justification is a simple non-sense. The truth is my nephew was killed for no fault”.

The deceased Peer Mehrajudin was working as a computer operator at a Khidmat centre of J&K bank in Kanihama village. 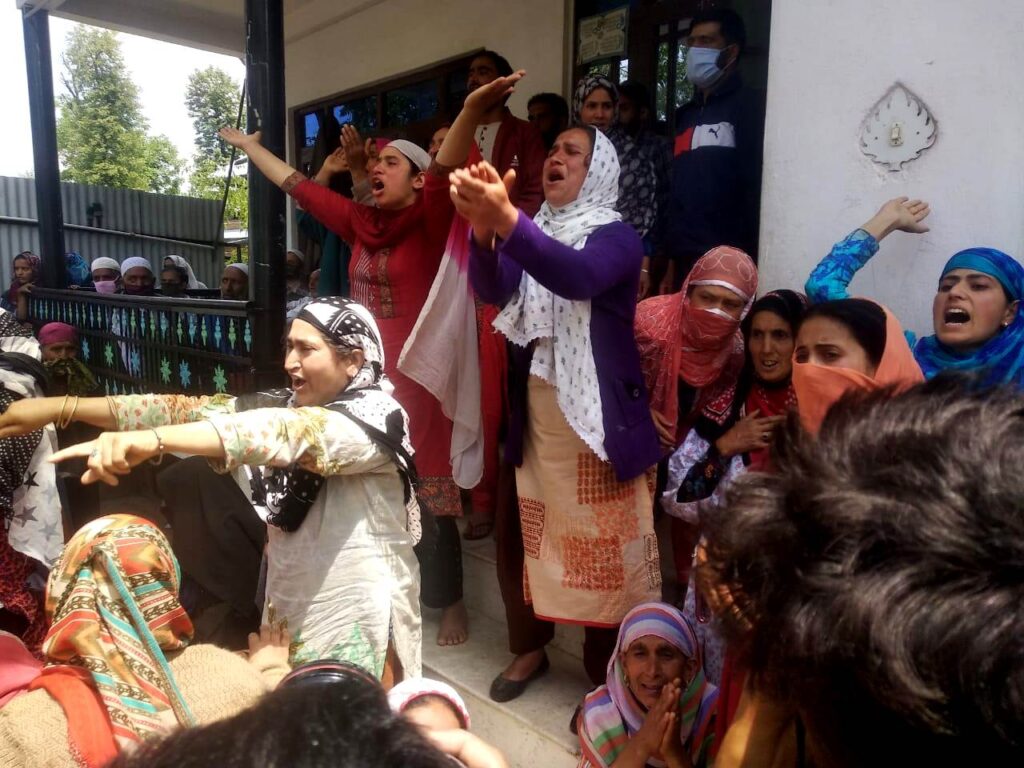 Father of the deceased, Ghulam Nabi Shah, 66, a retired employee of power development department, told this reporter that, “his son Mehrajudin was about to leave for his, some five kilometres away, when his Cop uncle asked him drop him to PCR Srinagar. So instead of his bike, he drove the car of his uncle”.

“He agreed and the duo left the home around 10 am in the morning,” Nabi said, adding, however, the shocker came when i received a call from unknown number asking me “Mehraj zanhan” (Do you know Mehraj)?”

To this, the father replied, “Aaaw, Mehraj myon ladka kyaze (yes, Mehraj is my son. Why are you asking?) Is everything alright? I questioned without having an idea what tragedy has befallen me”.

Then the man told him that his son was killed.

“What happened after that I have no idea. I lost my all senses,” the broken father said.

Peer Mehrajudin was graduate and was having a good hold on computer sciences.“For his skill and dedications, the owner of the common service centre had offered him job at his business unit,” Syed Marifat his cousin told this reporter.

The deceased was also famous for his playing cricket.

Peer Mehrajudin is survived by three sisters and three brothers and his elder brother -Shabir Ahmad Shah- is also working in the J&K police department as Assistant Sub Inspector.

Soon after the word spread that the youth was killed, people in huge number gathered at the road and tried to March to the place where the incident took place, some 8 kilometers from Makhama.

On reaching Adina, eyewitness said that they were intercepted by the forces including police and CRPF, resulting in day long clashes.

To keep vigil of the situations the drone camera was put on job for the entire day, however, couldn’t stop the people from pelting stones. 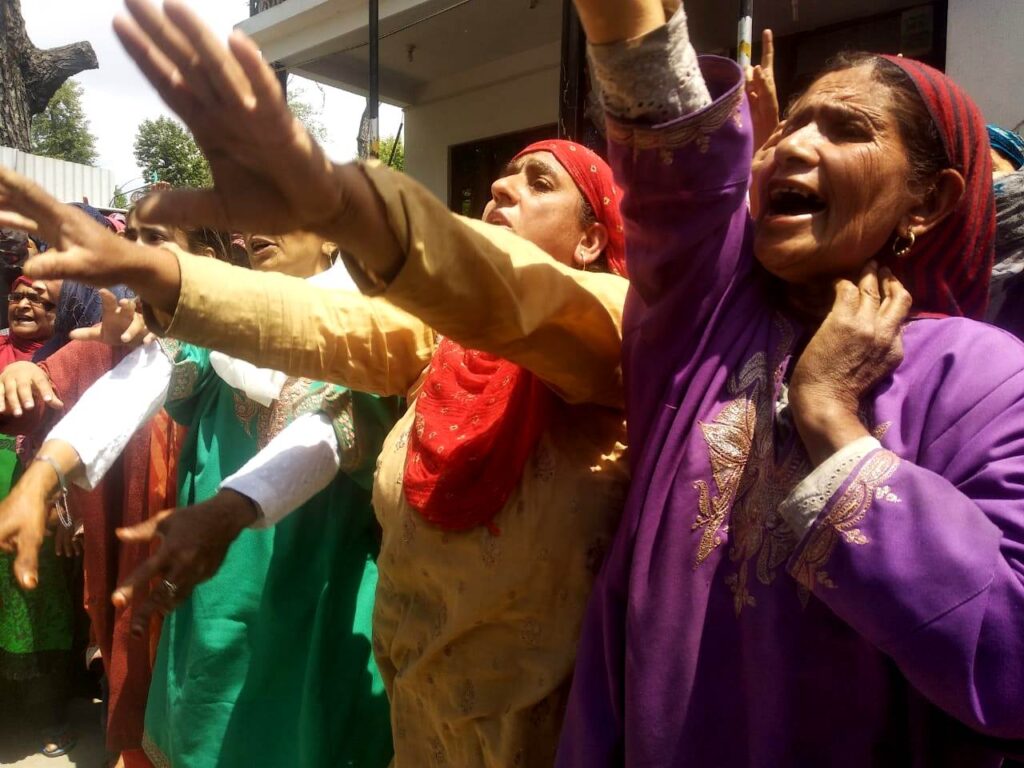 Scenes at the home

At Makhama, the native village of home of Peer Mehrajudin – located along the banks of roaring Sukhnag water stream, thousands of people have gathered to attend his last rites.

Inside the lawn of a double story house, the female mourners sitting inside a canopy were singing the dirges for the dead youth.

Among the large gathering of women, a mourner, Shaheena said,

“How long will the blood of innocents flow on the streets? Why don’t the stakeholders put an end to this bloodshed”.

She was supported by the other womenfolk encircling her, “Government’n kor yete zulam, Qatlas Karin pesh” (government has been doing tyranny here, why don’t they present the murderer).

Before they could speak further a woman from the corner raised slogans “Mehraj K khoon said Inqilab Aayai ga” and “Ham kya chahtai aazadi” (from the blood of Mehraj, revolution will come & we want freedom).

Outside the lawn, in a playground people have assembled in groups discussing the happening in Kashmir.

“It (killings) is not going to stop. We have to die one or the other day by the bullets of the government forces,” Ajaz Ahmad a mourner said.

After spending a day outside the gate of PCR in Srinagar in anxiety, Hassan said, after pleading the police officers I somehow managed to get the body back.

Around 5:30 pm the body was handed over to the family to perform the last rites. The funeral was attended by a huge number of people from across the valley.

“It (killings) is not going to stop. We have to die one or the other day by the bullets of the government forces,” Ajaz Ahmad a mourner said.

Finally he was buried in the local graveyard at Makhama.

The father of the deceased, Nabi while leaving the room to offer his son farewell said in a sobbing voice, “Ma Morukh Khanemoel, Mya Tsenik Putre’dagg (They have shot dead my heart, the pain of losing my dead son is unbearable and ceaseless)”.

After the killing of Peer Mehrajudin, the police and CRPF issued a statement saying that the driver of the car did not stop at the two checkpoints at the Kawoosa village, which “prompted forces” to open the fire.

CRPF stated: “A convoy of Army, at that point in time, was passing through the adjacent road and fearing a sabotage, the CRPF jawan of C/141, manning this Naka, fired warning shots. This civil car was driving in the wrong direction of the road and that was even more alarming. When the car didn’t stop, despite warning shots, the jawan fired at the car and in turn, the driver was hit on his left shoulder. Subsequently, he was shifted to SHMS hospital, Srinagar, where, he was declared as brought dead by the doctors.”

Police stated: “Police in a statement said that today at about 1020hrs, during joint Naka at Khalisa Kawoosa in the jurisdiction of PS Magam a Wagon-R vehicle bearing registration No. JK02AK-6702 was signalled to stop. However, the said vehicle ignored to stop and fled away from two Naka points in suspicious condition. The Naka party opened fire at the vehicle to thwart the attempt. The driver of the vehicle got injured in the incident and has been identified as Mehraj ud din Peer son of Ghulam Nabi Peer resident of Makhama Beerwah Budgam.

The injured was shifted to hospital for medical treatment, however he succumbed to his injuries. Police has registered a case and started investigation in to the matter”.